Will the Media Do Its Job and Save the Nation from Trump? 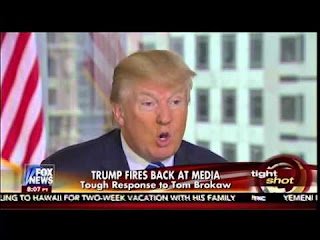 I criticize the mainstream media regularly for its failure to do its job and report the facts and not just provide a platform for blowhards and hate merchants.  As I note repeatedly, had the media question the lies being disseminated by George W. Bush and Dick Cheney and provided full coverage to critics of the rush to war, the Iraq War.  Now, with the GOP's surrender to the dark side (see the previous post), the only thing that may save the nation from disaster is the news media - assuming it does its job unlike what happened in the run up to the Iraq War.  A column in the Washington Post suggests that perhaps Trump has unwittingly sent the media down a reporting road that may prove fatal to Trump's candidacy - especially if the Democrats help feed the media with stories that need to be pursued.  I hope that the column proves prophetic.  Here are excerpts:

The news media have come in for a lot of criticism in the way they’ve reported this election, which makes it exactly like every other election. But something may have changed just in the last few days. I have no idea how meaningful it will turn out to be or how long it will last.

But it’s possible that when we look back over the sweep of this most unusual campaign, we’ll mark this week as a significant turning point: the time when journalists finally figured out how to cover Donald Trump.

They didn’t do it by coming up with some new model of coverage, or putting aside what they were taught in journalism school. They’re doing it by rediscovering the fundamental values and norms that are supposed to guide their profession.

If this evolution in coverage takes hold, we can trace it to the combined effect of a few events and developments happening in a short amount of time. The first was Trump’s press conference on Tuesday, the ostensible purpose of which was to answer questions about a fundraiser he held in January to raise money for veterans’ groups. In the course of the press conference, Trump was at his petulant, abusive worst, attacking reporters in general and those in the room.

These kinds of criticisms are not new — anyone who has reported a Trump rally can tell you how Trump always tosses some insults at the press, at which point his supporters turn around and hurl their own abuse at those covering the event — but Trump seemed particularly angry and unsettled.

It was excellent work — time-consuming, difficult, and ultimately paying dividends in public understanding. And Trump’s attack on them for doing their jobs the way those jobs are supposed to be done couldn’t have been better designed to get every other journalist to want to do the same. . . . Trump may have wanted to intimidate them, but it’s likely to have the opposite effect.

The same day as the press conference, a trove of documents from Trump University was released as part of a class-action lawsuit accusing Trump of fraud. The documents revealed allegations as to just what a scam that enterprise was . . . .  questions are now being raised about an investigation the Texas Attorney General’s office undertook of Trump University, which concluded that it was cheating Texans out of large sums of money; the investigation was dropped by then-AG Greg Abbott, who later got $35,000 in contributions from Trump and is now the state’s governor.

Plenty of presidential candidates have had shady doings in their pasts, but can you think of anything that compares to Trump University? A party’s nominee allegedly running a con not just on unsuspecting victims, but on victims specifically chosen for their vulnerability and desperation?

Then you had Trump’s continued attacks on the judge presiding over that fraud case. It’s unusual enough for a presidential candidate to be publicly attacking a judge in a case he’s involved in, but what’s most appalling is the blatant bigotry at the basis of Trump’s criticisms.

Put together this series of developments coming one after together, and I suspect that many journalists are deciding that the way to cover Trump is just to do it as honestly and assiduously as possible, which would itself be something almost revolutionary. If the tone of his coverage up until now has been “Wow, is this election crazy or what!” it could become much more serious — as it completely appropriate given that we’re choosing someone to hold the most powerful position on earth.

Trump himself probably finds such treatment grossly unfair, since to him “unfair” coverage is anything that doesn’t portray him in the most glowing terms. But it is perhaps ironic that after all this time of wondering how to cover this most unusual candidate, Trump has shown the press that the best way to do it is to cover him like every candidate should be covered. That means not just planting a camera at his rallies and marveling at how nuts it all is, but doing to work to fully vet his background, correcting his lies as swiftly and surely as they can, exploring what a Trump presidency would actually mean, and generally doing their jobs without letting him intimidate them.

If they can keep doing that, they’ll bring honor to their profession — and I doubt Trump’s candidacy could survive it.