Quote of the Day: Barney Frank on Bernie Sanders 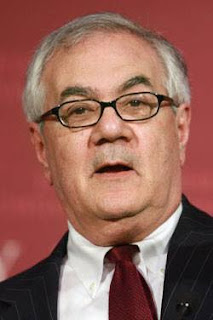 In his effort to satiate his seemingly limitless ego and vanity, Bernie Sanders has basically declared war on the Democrat Party and would have people believe that only he can be the savior they needs.  Only he is sufficiently progressive, etc., etc., - never paying heed to the reality that, if elected, he'd never get his agenda through Congress.  As noted several times of late, my opinion of the man decreases with every passing day, if not ever passing hour.  He needs to suspend his campaign and stop playing character assassin for the GOP through his constant attacks on Hillary Clinton.  Barney Frank summed things up well

"The Democratic Party.  The party that gave this country its first African-American President; the party that is poised to give this country its first woman nominee of a major party, very likely its first woman President; a party chaired by a Jewish woman; a party which features the first openly gay member of the United States Congress on the party's rules committee; isn't "progressive" enough, or inclusive enough, according to a 75 year old straight white male, who "white flighted" his way out of the most ethnically diverse city in the country, to the whitest state in the northeast United States, and who just passed his 1 year anniversary of declaring himself a member of the party, that he thinks that he is the only fit candidate to be the party's nominee for President. A nomination which if he can't secure it by the ballot, has threatened to secure it by lawsuits, and more than just hinted at violence. Am I getting this right?"

In his own way, Sanders' ego and narcissism is as bad as Donald Trump's.  Unbelievable!!  I am truly coming to despise the man.
Posted by Michael-in-Norfolk at Monday, May 30, 2016

At this point, Bernie might as well stay in the race. But I don't understand how he doesn't realize that the approach he has been taking -- trying to tear Hillary down, as very much distinct from talking up his own ideas -- is just doing the piece of trump's dirty work for him.

When Ralph Nader realized that his 2000 campaign was being funded by W supporters, he should have dropped out and hollered. He didn't, and the result is that for over fifteen years, Ralph Nader, who has NEVER done anything to make amends, has been justly reviled. And now, should god and enough voters forbid, if the piece of trump does get elected, Bernie's legacy will be to have played a major role as enabler.

And some of Bernie's purported supporters are even more sociopathic. It seems that they are absolutely clueless as to what the explicit agenda of the Republiscum is. (Note also your posting about lack of historical awareness.)