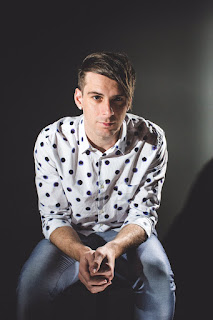 This blog began as a way for me to deal with my coming out process and, at the time, to compile material for a book as suggested by my therapist.  Along the way, I have shared my thoughts and feelings and given glimpses of my struggle growing up gay, yet denying it and striving to conform to what I thought my religion, society and my family expected.  It was an exhausting and soul killing experience that ground me down until I reached a point of either having to admit reality and come to terms with it or end my life (something I tried twice along the journey).  Today, many news outlets, both gay and religious, are reporting on the coming out of Trey Pearson (pictured at right), a Christian music star.  In reading the coverage, including the letter that Pearson released, I was struck by the common feelings and motivations that had pushed both he and I to strive to deny the truth about ourselves.  I want to share some of the coverage because it answers a question I am still often asked when people learn that I was once married to a woman and have children: when did you know you were gay and why did you get married?  Here are highlights from Religion News Service:

“I don’t mean to cry. It’s just been such a long time coming.”

Trey Pearson, 35, was overcome with emotion halfway into our first interview, and it is easy to understand why. For the past 15 years, he’s been the lead singer of the popular Christian rock band Everyday Sunday. But he decided to put his career on the line this week and acknowledge to his fans that he is gay.

“I finally decided to come out because I couldn’t keep trying to be something that I wasn’t,” he tells me.

(614) Magazine, an entertainment and culture magazine in Columbus, Ohio, will tell Pearson’s story in a 12-page cover story for its June issue. His narrative will ring familiar to many who grew up in a religious community. Pearson was raised in a conservative Christian home where he was taught that sexual orientation was a matter of choice. Though he knew from an early age that he was attracted to other males, he attempted to suppress his feelings and “be straight.”

“I never wanted to be gay,” he tells (614). “I was scared of what God would think and what all of these people I loved would think about me; so it was never an option for me.”

Nearly eight years ago, Pearson married a woman in hopes of achieving the kind of straight dream-life his community would support. Though he and his wife had two children, his hopes never materialized and Pearson realized he “was never going to be who my wife needed me to be.”

“I was not making it an option to be gay so I could be loyal to her and my children,” he told me. “But then I realized the only way I was ever going to be my best for them was to be healthy myself.”

Pearson’s shift places him in the center of a growing movement of popular Christian musicians who are coming out as gay and are advocating for a more open and accepting posture in the church. Ray Boltz, whose songs were staples in evangelical churches throughout the 1990s, came out as gay in 2004. Grammy-nominated Anthony Williams  became the first openly gay gospel artist in 2009. Jennifer Knapp, another Grammy-nominated Christian artist, acknowledged that she was a lesbian one year later. And in 2014, popular worship music artist Vicky Beeching told The Independent that she too was a lesbian.

These musicians paid a hefty price. Since Christian music fans tend to be conservative and believe that homosexual acts are sinful, you won’t hear these artists’ music played in most churches or on Christian radio these days.

I absolutely want to be a voice for other people,” Pearson says. “I know there are more and more Christians that realize how important this is, and I hope I can join with them in seeing this change.”


As for Pearson's letter to his fans and friends, here are excerpts:


To my fans and friends:

Most of us reach at least one pivotal moment in our lives that better defines who we are.
These last several months have been the hardest – but have also ended up being the most freeing months — of my life.

To make an extremely long story short, I have come to be able to admit to myself, and to my family, that I am gay.

I grew up in a very conservative Christian home where I was taught that my sexual orientation was a matter of choice, and had put all my faith into that. I had never before admitted to myself that I was gay, let alone to anyone else. I never wanted to be gay.

I’ve tried my whole life to be straight. I married a girl, and I even have two beautiful little kids. My daughter, Liv, is six and my son, Beckham, is two.

I had always romanticized the idea of falling in love with a woman; and having a family had always been my dream. In many ways, that dream has come true. But I have also come to realize a lot of time has passed in my life pushing away, blocking out and not dealing with real feelings going on inside of me. I have tried not to be gay for more than 20 years of my life.

I tried to convince myself that this was what God wanted and that this would work. I thought all of those other feelings would stay away if I could just do this right.

When Lauren and I got married, I committed to loving her to the best of my ability, and I had the full intention of spending the rest of my life with her. Despite our best efforts, however, I have come to accept that there is nothing that is going to change who I am.

I know I have a long way to go. But if this honesty with myself about who I am, and who I was made by God to be, doesn’t constitute as the peace that passes all understanding, then I don’t know what does. It is like this weight I have been carrying my whole life has been lifted from me, and I have never felt such freedom.

In sharing this publicly I’m taking another step into health and wholeness by accepting myself, and every part of me. It’s not only an idea for me that I’m gay; It’s my life. This is me being authentic and real with myself and other people. This is a part of who I am.

I hope people will hear my heart, and that I will still be loved. I’m still the same guy, with the same heart, who wants to love God and love people with everything I have. This is a part of me I have come to be able to accept, and now it is a part of me that you know as well. I trust God to help love do the rest.

Without realizing it perhaps, Pearson has described the private struggle and agony that I and many others have experienced.  For readers who are still in the closet, I hope you with think about what Pearson has said.  It applies to all of us who due to religious based ignorance and bigotry tried so hard to live a lie.  I wish Pearson much happiness and much deserved self-acceptance.