The GOP Surrenders to the Dark Side 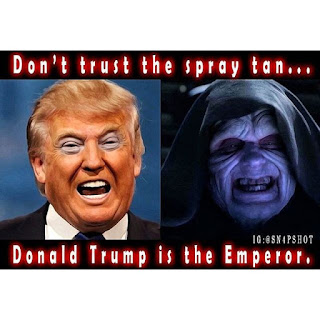 As a former Republican, I am sadden to see what has become of the party.  With the GOP's embrace of Donald Trump, I am reminded of the scene in the Star War movies when the Galactic Senate surrendered to the machinations of Emperor Palpatine and brought about the end of the Republic.  As in the movie, this surrender of the GOP did not have to happen.  Sadly, by marketing hate, racism, bigotry and misogyny and by embracing ignorance as a virtue, the leadership of the Republican Party set the stage for the rise of Trump and likely the ultimate death of the party.  Conservative columnist Kathleen Parker has a piece in the Washington Post where she to laments the demise of the GOP as a responsible political party.  Here are column highlights:

With the surrender of House Speaker Paul D. Ryan (Wis.) to the Trump crusade, it is fair to wonder what the Republican Party stands for.

Ryan’s endorsement of Trump, which appeared in an op-ed the speaker wrotefor his hometown paper — rather than before a gaggle of reporters and newscasters with his arm draped around Trump’s shoulders — was a white flag from the establishment opposition.
In other words, he caved, as most everyone knew he would after a respectable period of resistance.

The party has to stand united, after all. Because, as the Geico guy would remind us, that’s what they do.

Next likely to fall will be evangelical Christian leaders, who are scheduled to meet with Trump on June 21. The expectation is that Trump will promise to pick conservative Supreme Court justices who would restore the nation’s social order to a pre-Roe v. Wade, pre-gay-rights version.

If the purportedly devout can accept the ungodly Trump as the nation’s leader, then there really is nothing sacred. But, by God, he’s better than Hillary Clinton, clamors the crowd.

To Trump’s supporters, a billionaire with no governing experience, questionable business practices and secret tax returns would be vastly better than Clinton on no substantive basis whatsoever. Most compelling of all is the belief that Trump would nominate conservative justices.

There’s no knowing whom Trump would nominate, notwithstanding the list of 11 judges he released last month, indicating the sorts of jurists he’d select. The list was merely a “guide” Trump said he would use in making his selections.

In other words, what you see may not be what you get.

This applies as well to Trump, about whose policies we still know next to nothing. What we do know is that Trump is a chameleon who changes his positions with the same conviction he takes to the wedding chapel.

Millions of others, contrarily, can’t ignore Trump’s tendency to be crude, rude and impetuous, not to mention disingenuous, contentious, simplistic — “I hate [nuclear] proliferation!” — and irresponsibly ignorant. And yet party leaders against their better instincts have circled the wagons around a movie character, not Chauncey Gardiner in “Being There,” as I once suggested, but Tom Hanks’s character in “Big.”

As you’ll recall, Hanks acts the part of a boy, who, having been granted his wish to be all grown up, suddenly inhabits the body of an adult. But still a child, he behaves as one. Fortunately, the worst thing Hanks’s character does is to behave so adorably that a grown woman falls for him.

Now imagine that the boy hadn’t been a sweet child but was a spoiled brat and a bully. What sort of child-inhabited man might Hanks have been then? Kim Jong Un, North Korea’s tantrum-throwing nuke-slinger, comes to mind.

So does Trump, not that I’m comparing the two, but you get the gist. Of all the carefully examined flaws in Trump’s persona, the most concerning and potentially dangerous is his immaturity.

Like a child used to getting his way, he shouts, pokes, bullies, berates, pouts and parades. And thanks to him, the GOP’s big tent has become a tough-kid’s idea of a party — peopled with hot dames, swindlers, gamblers, bosses, bouncers and thugs — and some, I assume, are good people.

At least now, Ronald Reagan can finally get some rest. The Republican Party has left him.