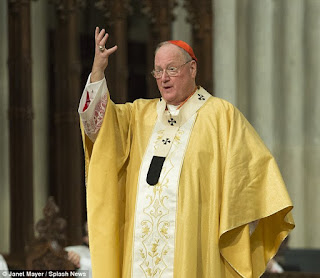 Once again we are seeing proof that the Roman Catholic Church hierarchy's claimed - I would say feigned - contrition for the world wide sex abuse scandal means absolutely nothing.  As the old saying goes, actions speak louder than words, and the Church's expenditure of $2.1 million in lobbying aimed at blocking changes to New York State's statute of limitation law concerning sexual abuse lawsuits literally screams volumes about the moral bankruptcy and disingenuous nature of the Church leadership from the throne of St. Peter all the way down to every local diocese and parish.  A piece in the Daily Mail looks at this unconscionable behavior by the Church.  Here are highlights:

According to the New York Daily News, the church in New York spent $2.1 million employing external lobbyists to press their case against changing the current legislation.

One proposal would see the current limit extended from 18 to when the victim is 23. A further proposal would introduce a one-year window where any victim would be entitled to make their claim, regardless to the length of time since the abuse happened.

Another proposal would see the statute of limitations increased to 30 years.

Among the issues raised by the lobbyists on behalf of the church was the 'statute of limitations' and timelines for starting 'civil actions related to sex offenses'.

Melaine Blow of the Stop Abuse Campaign said: 'They are willing to spend limitless money in order to basically keep bad guys from being accountable for their actions. I think they’re doing it because they don’t want to have to pay out settlements.'

The church has argued strongly against proposals for a one-year window to allow historic sex abuse cases as it could bankrupt the institution.

The Archbishop of the New York Archdiocese Cardinal Timothy Dolan is opposed to the mooted changes.

The information is held by the New York State Commission on Public Ethics.

Earlier this month, a rally in New York called for the lifting of the statute of limitations on suing abusers who are currently blocked from acting once are aged 23.

Their effort has faced years of opposition from the Catholic Church and other institutions.

Lawmakers said prospects are improving with a recent change in legislative leadership in Albany. They also cited Massachusetts' passage two years ago of a similar measure and the recent Academy Award-winning film 'Spotlight' about priests sexually abusing boys in Boston.

Assemblywoman Margaret Markey said: 'I think we have some movement on the bill.'  Markey's legislation would end New York's statute of limitations for bringing civil lawsuits against sex predators of victims under 18. It would also establish a one-year lookback where cases could be brought for abuse years ago.

Sen. Brad Hoylman, a Manhattan Democrat, has introduced a companion bill that would also allow such suits against public institutions, including schools and state and local governments, addressing one of the arguments by private institutions that they were unfairly singled out.