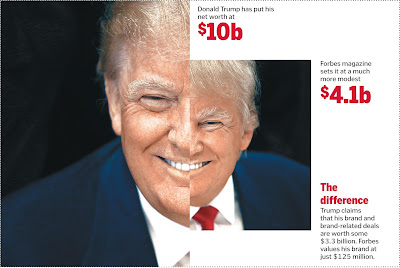 Not only is Donald Trump taking a beating over his shady - OK, let's be honest, fraudulent - Trump University, but now his claims of the amount of his wealth is coming under  ever increasing scrutiny.  The take away?  That both Trump's wealth and claimed income are grossly inflated through shady accounting practices that lack any supporting backup.  Equally fun is the fact that more and more experts suggest that Trump pays very little in taxes which explains his refusal to release hid tax returns.  Politico looks at the situation.  Here are highlights:

Donald Trump claims a net worth of more than $10 billion and an income of $557 million. But he appears to get there only by overvaluing properties and ignoring his expenses.

POLITICO spoke with more than a dozen financial experts and Trump’s fellow multimillionaires about the presumptive Republican nominee’s latest financial statement. Their conclusion: The real estate magnate’s bottom line — what he actually puts in his own pocket — could be much lower than he suggests. Some financial analysts said this, and a very low tax rate, is why Trump won’t release his tax returns.

“I know Donald; I’ve known him a long time, and it gets under his skin if you start writing about the reasons he won’t disclose his returns,” said one prominent hedge fund manager who declined to be identified by name so as not to draw Trump’s ire. “You would see that he doesn’t have the money that he claims to have and he’s not paying much of anything in taxes.”

Trump is certainly wealthy. But in a campaign where the New Yorker has portrayed himself as the biggest, the richest, the classiest and the best at everything, disclosing that he is less rich than he lets on could be damaging. And it is a line of attack Democrats are already using and hope to pound away on until November.

The case against Trump’s accounting of his wealth: His businesses apparently generate a lot of revenue but may not put much cash in his pocket; he assigns himself a net worth that is impossible to verify and may be based in part on fantasy; and he is selling assets and increasing debt in ways that suggest a man scrambling for ready cash.

In response to a list of questions for this story, Trump campaign spokeswoman Hope Hicks emailed: “The report speaks for itself.” If it does, the 104-page report — which Trump filed with the Federal Election Commission on May 17 — does not speak clearly.

The financial disclosure form showed Trump adding fresh debt of at least $50 million, though a campaign news release said Trump is using increased revenue to reduce his debt, which is now at least $315 million and possibly more than $500 million. The disclosure also suggests that Trump sold fund assets to raise as much as $7 million in cash and individual securities to raise up to $9 million more.

The apparent increase in debt and securities sales raises questions about the amount of cash Trump has on hand.

“If he is swimming in so much cash for all his holdings, why is he selling this stuff to raise cash?” asked another ultra-high-net-worth individual who also reviewed the filings and declined to be identified by name to avoid Trump’s wrath.

Trump’s tax returns could clarify a great deal about his actual income. But Trump’s campaign chairman, Paul Manafort, said in an interview with The Huffington Post last week that he would be “surprised” if Trump ever releases the returns, which is not required but which every major presidential candidate has done since 1976.

Trump attributes the refusal to ongoing audits. But there is no prohibition on individuals releasing returns under scrutiny by the IRS. The refusal has led to rampant speculation among Wall Street executives who have done deals with Trump that his returns would show surprisingly low income.

There is no dispute that Trump owns many valuable properties that contribute to a high net worth. But there is a great deal of dispute about how high that worth actually is. The financial disclosure form lists assets worth at least $1.5 billion, but the ranges included are far too wide for an observer to determine anything close to a precise figure.

“Trump has a tendency to value his brand at a very high amount, but these are usually intangible valuations just pulled out of thin air,” said Steve Stanganelli, a certified financial planner at Clear View Wealth Advisors. “And he appears to be reporting gross revenue. There is a huge difference between that and net income. What really matters is what you put in the bank.”

A big chunk of Trump’s net worth figure comes from high valuations he bestows on his golf course properties. Trump values nine of his golf properties at “over $50 million” for a total of at least $450 million. He values at least four more at up to $25 million and a fifth at up to $50 million. But golf course valuation experts say there is nothing in the report to support these lofty figures.

“We have somebody on the one hand who has lawyers saying the value is less than $2 million while at the same time he’s claiming it’s worth over $50 million,” Levenberg said in an interview. “And we have seen no revenue or expense forms. It can’t be that he is making all this money but saying he doesn’t have to pay taxes on it. That’s less money for the children in school, less money for learning.”

Thus far, Trump has proved impervious to this line of argument, backing up claims from Manafort and others that voters simply don’t care about Trump’s tax returns and believe that he is the fabulously successful titan he says he is.

But if anything could damage the Trump brand, some analysts say, it would be persistent revelations about his business record and personal riches. “By any stretch, Trump is rich. But the perception now is that he is richer and huger and better than everyone,” said Stanganelli. “What happens if that perception changes?”

Simply put, Trump is a con-artist and he is conning a significant portion of the GOP base that seemingly is to ignorant and unsophisticated to realize that they are being played for fools by a loud mouth, narcissist and egomaniac.
Posted by Michael-in-Norfolk at Thursday, June 02, 2016

By this time, your readers have probably also heard of undoubted billionaire Mark Cuban's very much on the record comments that from the Federal Election Commission filings, "we know without any question that as of May 27, Donald doesn’t have more than $165 million in cash and securities and bonds. And trust me, I’ve got a lot of more than that in cash, securities, and bonds.”

That's still a trumpload of money. Even if it's a million less now that the piece of trump was forced to come up with the million he was thinking he could stiff the veterans on.

But about all that the piece of trump has to sell is chutzpa and his ego. And it's become clear that he is quite sensitive to any perceived affronts to his ego.