Brexit- A Referendum Against the Modern World. 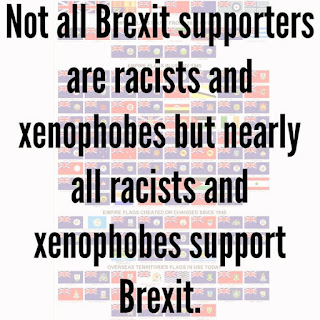 After finishing the previous post, I came across this column in the New Statesman that looks at the pro-Brexit forces and the take away is that the mindset that is rallying low information and poorly educated Americans to Donald Trump is nearly identical to that of those who voted for Britain to leave the European Union.  Taken as a whole, the mindset is one of opposing modernity and the modern world in general.  Yes, it may feel good in some ways (I'm sure Christofascists and white supremacists "feel good" when they hear Donald Trump's rants), but it is not a realistic means of facing the future.  Like it or not, the world and society are changing and one can either adjust to the changes and move forward or stand in opposition and eventually find one's self on the trash heap of history.  Read the entire column and you will see that it applies just as equally to Donald Trump supporters as to those who voted to leave the EU.  Here are highlights:

This morning, I woke up in a country I do not recognise. David Cameron’s big gamble – the future of Britain against his personal political ambitions – has backfired so badly that we’ve blasted clean out of the EU. By the time I’d put the kettle on, the stock markets were in free fall, Scotland was debating a new independence referendum, Sinn Fein was making secession noises, and the prime minister had resigned.

There’s not enough tea in the entire nation to help us Keep Calm and Carry On today. Not on a day when prejudice, propaganda, naked xenophobia and callous fear-mongering have won out over the common sense we British like to pride ourselves on. Not on a day when we’re being congratulated by Donald Trump, Marine Le Pen, and nobody else. Well done, turkeys. Santa’s on his way.

Nigel Farage, the rich, racist cartoon demagogue, boasts that this victory was won “without a single shot being fired”. Tell that to the grieving family of Jo Cox, the campaigning Labour MP gunned down last week. Farage promised that unless something was done to halt immigration, “violence will be the next step”. It looks like we’ve got a two-for-one deal on that one.

This was never a referendum on the EU. It was a referendum on the modern world, and yesterday the frightened, parochial lizard-brain of Britain voted out, out, out, and today we've all woken up still strapped onto this ghost-train as it hurtles off the tracks. Leave voters are finding they care less about immigration now that their pension pots are under threat. Maybe one of the gurning pundits promising them pride and sovereignty should have mentioned that, but they were too busy lying about the NHS. The curtain has been torn away and now we all have to look at the men behind it. They are not good men.

Anyone feel like they’ve got their country back yet? No? That, after all, was the rallying cry of the Leave campaign – the transatlantic echo of "Make America Great Again". There’s a precedent for what happens when svengalis with aggressively terrible haircuts are allowed to appeal to parochialism and fear in the teeth of a global recession, and it isn’t pretty.

It says something about this campaign that I’m no longer at all worried about risking hyperbole or unoriginality when referencing all that Nazi history they made us study in school. I’m just frightened. I’m frightened that those who wanted "their" country back will get their wish, and it will turn out to be a hostile, inhospitable place for immigrants, ethnic minorities, queer people – everyone and anyone who wasn’t included when Farage proclaimed victory for "ordinary, decent people" this morning in front of a posse formed entirely of angry-looking, whey-faced blokes in suits.

But the thing is – I want my country back too. . . . A country where people – all people – can feel at least a little bit safe. I want to rub the sleep of neofascist nightmares from my eyes and find myself in a country where we do not respond to the killing of a politician by voting against everything she stood for. A country where we are polite to our neighbors. A country where we have dealt like adults with the embarrassing fact that we once conquered half the world, instead of yearning for a time when our glory was stolen from enslaved people a convenient ocean away and large parts of the map were the gentle pink of blood in the water. I want to go back to a Britain where hope conquers hate; where crabbed, cowed racism and xenophobia don’t win the day; where people feel they have options and choices in life and are less likely to press the big red button to bring the house down on top of us. I want my country back.
This morning it looked like Britain had shot itself in the foot. By lunch time, with two political parties imploding and the stock markets crashing, it appears our aim was higher above the knee. This was not just a vote against Europe, but a vote against Westminster and the entirety of mainstream politics. Every political party campaigned hard for a "Remain" vote – but Britain still chose to Leave, even if we’re regretting it this morning.

In the meantime, the cackling clown-car drivers rolling this catastrophe over the wreckage of civil society are already cheerfully admitting that they lied about their key campaign statements. No, there won’t be £350m more to spend on the NHS, whatever Vote Leave wrote on its battle bus. It turns out that the reason you can’t get a GP appointment isn’t because of immigration, but because the Conservatives have spent six years systematically defunding the health service and cutting public spending to the bone. Brexit will mean more of that, not less.

This was a working-class revolt, but it is not a working-class victory. That’s the tragedy here. The collective howl of rage from depressed, deindustrialised parts of the country bled white and reckless by Thatcher, Blair and Cameron has turned into a triumph for another set of elites.

All I see is a lot of racist crowing on the internet and campaigners being told to go back where they came from. I’ve already had people telling me it won’t be long before a new Kristallnacht, and people like me had better go back – where? I was born in London. Perhaps the city can secede. That’ll do wonders for house prices.

Britain, like everywhere else, has always had its cringing, fearful side, its cruel delusions, its racist fringe movements, its demagogues preying on the dispossessed. Those things are part of us as much as beef wellington and bad dentistry. But in happier times, those things do not overwhelm us. We do not let bad actors reading bad lines in bad faith walk us across the stage to the scaffold. We are better than this.

This type of post mortem will apply to America if Donald Trump and the Republicans are not resoundingly defeated in November.   When I see neighbors supporting Trump, I cannot help but ask myself, "are they really that stupid and/or bigoted?" 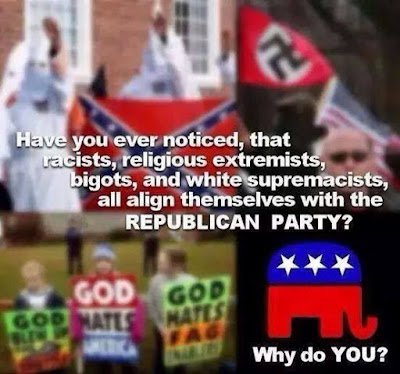