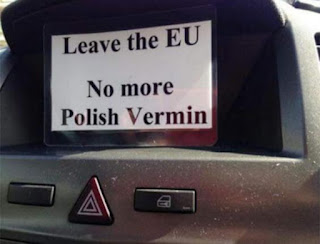 With many pundits and talking heads swooning and saying that the Breixt vote in the United Kingdom might be a clue for a Donald Trump victory in November, one would think that the pro-Trump forces and the forces of bigotry and xenophobia might want to spend a few moments considering what leaving the European Union could likely mean for Great Britain.  Besides the huge negative economic impact, the nation now faces renewed signs of splintering as Scotland plans to hold a new vote on exiting.  Even Northern Ireland is no longer a safe bet at remaining and there is a  stampede of Britons who are seeking Irish passports since it would allow them the benefits of remaining in the EU.  The right wing may be "taking back their country," but that country is likely to be much diminished and the poor even worse off than under the EU.  A Pyrrhic victory at best.  A piece in The Economist looks at more of the possible self-inflicted harm that awaits the UK - or what will be left of it.  Here are highlights:

Britons have benefited from a global version of the QWERTY syndrome; our ancestors defeated the French in the battle for European control of North America. Not only did this establish English as the global language, but the natural alliance with America helped Britain win two world wars. The use of English and the country’s geographical position has made Britain a natural base for international business and finance. By being on the “right side” of those wars, English people grow up with a fairly benign view of their role in history and are shocked to find that the Irish (let alone the Scots) and citizens of the countries we invaded have a much more jaundiced impression. In a sense, then, modern Britons were “born on third base and think they hit a triple.”

It was not always thus. Just 40 years ago, Britain was a mess. As a teenager I recall doing homework by candlelight in the power cuts of 1972, the three-day week, endless strikes and a widespread sense that Britain was ungovernable. It was a shabby, dirty country; when my mum hung out the washing in Peterborough, the soot from the brick chimneys made it dirty again. There was widespread racism; “Paki-bashing” was a favourite sport of teenage boys. In the late 1970s, more people were leaving Britain than immigrating;London’s population fell by a quarter between 1939 and the early 1990s. Slowly but surely,  changed. Was it the EU? Was it Margaret Thatcher’s reforms? Was it  oil (another lucky break)? Whatever the reason,  became more confident, more vibrant, more multicultural. . . . The British economy was no longer the “sick man of Europe”, especially in the run-up to 2008. Yes, there was too much debt and too big a bet on financial services; but these were not the only areas where Britain was doing well. The car industry has been revived under foreign ownership; aerospace remains important, as does pharmaceuticals; and Hollywood calls on Britain’s creative and technical expertise. The sense of national decline had gone; people flocked to live and work in London as one of the world’s great cities.

Not everybody, of course, welcomed these changes. And I understand that it is easier for a middle-class Briton to feel more secure about it than for someone on the minimum wage. Workers in the developed world felt that the benefits of globalisation were passing them by. Still, Britain has had rather more success, post-2008, in driving down its unemployment rate than France, Spain or Italy.

Now in the space of a week, there is a sense that all that has changed. The referendum campaign seems to have awakened some “rough beast” within the British public; never mind a halt to immigration, some people think existing immigrants are about to be forced out. There are widespread reports of racist incidents and attacks.

Yes, of course, the 17m people who voted Leave did so for a wide variety of reasons, from sovereignty through to the hope that more money would be spent on the NHS. The Leave campaign was always an odd coalition between slightly eccentric back-bench Tories (who were also climate-change sceptics) and UKIP’s nativist instincts. Part of the reason for the post-referendum chaos is that there was no coherent plan for what a post-Brexit Britain would look like.

[T]the country looks more like the  I remember from the 1970s and less the kind of country that I can feel proud about. And that matters because my children may soon lose the right to live and work in the rest of the EU, an insurance policy against nastiness at home. And if I feel that way, how many more talented, more mobile people, who came to  because it seemed like an open tolerant place, might decide to leave?  To illustrate the point, here is a tweet from an Italian living in London

Many international professionals already thinking of leaving London and move elsewhere. Not bc of legal status, bc they no longer feel home

And as they go, the people in this video will feel like they have won.

Do Americans want to suffer a similar economic free fall just so racists can feel good about themselves?
Posted by Michael-in-Norfolk at Wednesday, June 29, 2016