Donald Trump: America Must Commit War Crimes As a Matter of Principle 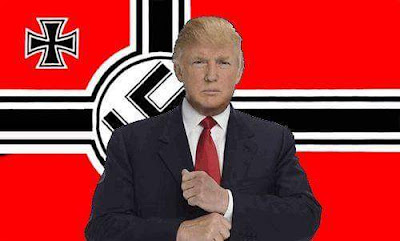 As noted frequently, one of the ironies at first blush until further analysis in given in the 2016 presidential election cycle has been the allegiance  that self-claimed evangelical Christians and "real Americans" have been giving to Donald Trump - a man whose personal life is the glaring opposite of the Gospel message.  But on a closer look, Trump and evangelicals are a match made in heaven if you will.  Like Trump, I would venture that a majority of the evangelical Christians are narcissists - they certainly view themselves as superior to all others.  Similarly, they seemingly never admit that they are wrong or may have committed wrongs, especially wrongs to others.  And when it comes to greed, evangelicals and Trump are on the same page and can never have enough, even as they advocate for drastic cuts in government programs for the poor and disadvantaged.  And when it comes to torture and war crimes, Trump and these hate and fear motivated folks are again largely on the same page.  Something that tells a great deal about just how foul these "Christians" are in fact.  New York Magazine looks at Trump's position of committing war crimes.  I'd venture to guess that those supporting Trump are those who most profusely self-congratulate themselves on their piety and religiosity.  Here are article highlights:

Hours after Tuesday's massacre at Ataturk International Airport, Donald Trump called on America to "fight fire with fire." The presumptive GOP nominee told supporters in Ohio that, while he likes waterboarding, it probably isn't "tough enough."

"We have to be so strong," Trump said. "We have to fight so viciously. And violently because we're dealing with violent people viciously."

On Thursday night in New Hampshire, Trump reiterated his belief that America should hold itself to the same standard as a fascist death cult. Asked by local station NH1 to respond to Senator John McCain's claim that torture is "not the American way," Trump replied:

It's worth remembering that, for the Republican standard-bearer, ordering the military to hunt down and kill the wives and children of suspected terrorists falls under the "thinkable" column.

That Donald Trump will happily court human beings' worst instincts for political gain is not breaking news. What's interesting about his renewed support for deliberate war crimes is that there's no evidence such heinousness even has a political upside. In the wake of the Orlando shooting, the American people were scared. Eight in ten told pollsters from the Washington Post and ABC News that they were afraid of lone-wolf terrorism. But those respondents also overwhelmingly preferred Clinton's response to the tragedy over Trump's, and had more faith in her capacity to handle terrorism than they did in the mogul's.

In light of this finding, it seems unfair to assume that Trump's pledge to do the "unthinkable" is motivated by crass political calculations. Rather, pundits should give the presumptive GOP nominee the benefit of the doubt, and assume his support for war crimes is a genuine expression of a deeply held faith in the cleansing power of sadistic violence.