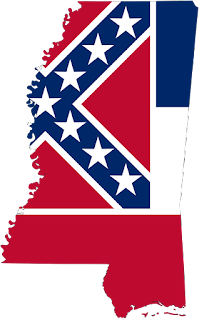 It's been a truly bad day for the Bible thumping crowd.  Between the Supreme Court ruling today striking down Texas' anti-abortion laws and last weeks ruling upholding affirmative action, many among the "godly Christian" white supremacist crowd must be truly having the vapors if not falling down in conniption fits.  Now, as icing on the cake, a federal judge has largely gutted Mississippi's license to discriminate law that made it open season for gay bashing.  In his ruling, U.S. District Judge Carlton Reeves held that Mississippi clerks of court cannot cite their own religious beliefs to recuse themselves from issuing marriage licenses to same-sex couples.  Oh, the horror!! Christofascsts will not be above the law!!  Kudos to Jude Reeves.  I hope this is the beginning of a line of cases that will hold the "godly folk" to the letter of the law like everyone else.  If performing a CIVIL law marriage so offends their sensibilities, there is a very easy solution: resign from your position as clerk.  The full ruling can be found here.  Here are excerpts from Towleroad on the decision:

A federal judge in Mississippi has ruled that county clerks cannot cite their own religious beliefs as a valid legal reason to deny issuing marriage licenses to same-sex couples.

The ruling guts part of Mississippi’s HB 1523, one of the worst religious freedom bills to be passed to date in the United States.

[U.S. District Judge Carlton] Reeves is extending his previous order that overturned Mississippi’s ban on same-sex marriage. He says circuit clerks are required to provide equal treatment for all couples, gay or straight.

Reeves has not yet ruled in two other lawsuits seeking to block all of the religious objections law, including provisions that could affect schools’ bathroom policies for transgender students.  HB 1523 is set to go into effect this Friday.

The case was argued by Roberta Kaplan, who won the historic Supreme Court DOMA case.  Kaplan, who is representing the Campaign for Southern Equality, argued HB 1523 violates First Amendment separation of church and state. She told CSE after today's ruling, "Judge Reeves reaffirmed the authority of federal courts to say what the United States Constitution means."

It is far past the time that undeserved deference to feigned religious belief as an excuse for bigotry and discrimination cease forever.  In America, the Constitution and the rights it insurers to ALL CITIZENS (not just white Christofascists) is the law of the land.  The Bible, the Koran, and any other half-baked "book of scripture") takes second place.  It is really that simple.