Messages of Hate to Toronto Pride 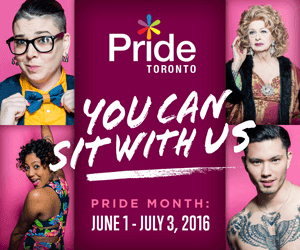 It is often easy to forget that the anti-LGBT animus that LGBT Americans face in our daily lives is not something unique to America even though our nation is still "the most religious" of any of the world's developed nations.  Truth be told, the same toxic poison that creates homophobia and anti-LGBT hate in America is the root cause of such hatred and ill-will worldwide: RELIGION.  The Toronto Star looks at some of the utterly vile and hate-filled things being said to Toronto Pride which fields its pride event in the coming weeks.  To illustrate the point, in a video posted by the Toronto Star members of Pride Toronto read some of the letters and e-mails that the organization has received.  Here are story highlights:

Homophobia and hate is still rampant in our society — just ask Pride Toronto.

Every day, the organization receives hate mail — usually from anonymous people who don’t believe in Pride’s mission to make the city safer and more accepting for LGBTQI people.

“If you were my child and you turned out gay I’d burn you alive,” said one particularly vile message.

In a video, employees from the Star read these tweets, letters and emails to members of Pride Toronto in order to show the damage that hatred has on our community.

“It’s a little surreal, it almost seemed fake to hear the words out loud,” said Michelle Cherny, a member of Pride’s board of directors. “The hate is out there.”

Rachel Lauren Clark, another member of the board, says the worst part of hearing the hate mail read out loud wasn’t the message’s content, but the fact it is so commonplace. “When you’re a person who hears that stuff everyday, you become numb to it,” she said.

Clark says people who want to spew this kind of hatred typically hide behind the veil of anonymity, rather than confront anyone face to face and actually learn something.  “It’s a bit cowardly to do what they do,” she said.

Clark says the message that shocked her the most was from someone who said that as a transgender person, no one could love her.

Andrea Delgado, who works in media relations for Pride and participated in the video, says the volume of hate mail proves that Pride still needs to exist.

“It’s so sad that we’re working so hard to try and put ourselves out there and make a difference, but at the end of the day there will still be those people who don’t want to listen,” Delgado said.

Pride may not change a hateful person’s mind, Clark says, but it can help change the tide for future generations.  “We need to have Pride so that those voices can be heard, we are far from liberation, we are far from being equal,” she said.

To me the most numbing things is this statement: “If you were my child and you turned out gay I’d burn you alive.,”  As the parent of three children, I cannot comprehend such a statement.  How does one get so warped and hate-filled?  In a word, religion.  Be it fundamentalist Christianity or fundamentalist Islam, the hatred is the same and all of the putrid mindset traces back to the Old Testament.  When is the larger public going to say "No More!" and start shutting down and shunning anti-LGBT religious extremism?

Email ThisBlogThis!Share to TwitterShare to FacebookShare to Pinterest
Labels: Bible as a message of hate, Christian Taliban, pride, religion as justification for evil, religious based hate, Toronto