Brexit Economic Disaster Ought to Be Cautionary Note to Trump Supporters 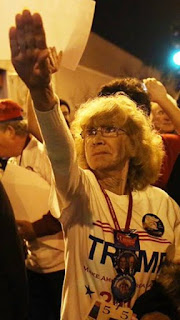 There are significant parallels between British voters who favored leaving the European Union and the low information, low education supporters rallying to Donald Trump's sound bit of >Make America Great Again."  Trump, of course has no specifics as to how he would deliver on the campaign promise.   Neither did those advocating Britain's exit from the European Union.  Like Trump they offered platitudes and sound bites and now that the leave vote has prevailed, they are already changing their tune on what they had promised.  Meanwhile, a slow moving catastrophe is overtaking the British economy thereby showing that feeling good about one's self or wanting "change" doesn't necessarily translate into something good or viable.  Will Trump supporters be chastened by what is happening to Europe?  Probably not.  Their xenophobia, racism and fantasies about restoring a lost past will likely overwhelm rational thinking.  The New York Times looks at some of what this "feel good vote" is wreaking on Great Britain.  Here are excerpts:

A few weeks before Britons voted on whether to remain part of the European Union, Michael Gove, one of the leaders of the Leave campaign, was asked why he should be trusted over the overwhelming number of economists and international authorities who opposed Brexit. “People in this country have had enough of experts,” he replied.

Experts are, of course, known to make mistakes. But in this case, the people who voted for Brexit will pay a big price for ignoring economic expertise. The harmful effects of this vote are both immediate and lasting.

Britons are already worse off. The pound has — so far — plunged by nearly 9 percent against the dollar, slashing the value of British assets, with higher import prices likely to follow. The stock market has also taken a hit. The prices of property, most British people’s main asset, are almost certain to fall, too. While Mark Carney, the governor of the Bank of England, has already pledged 250 billion pounds (about $345 billion) to support the financial system and has said he could offer more if necessary, central bankers cannot protect against an enduring economic shock.

Now, a country renowned for its political and legal stability is descending into chaos. The future prime minister is unknown, as is the direction his or her policies will take. The favorite to replace David Cameron, Boris Johnson, the former mayor of London who opportunistically campaigned for Brexit, styles himself as pro-market and pro-globalization, but in the lead-up to the vote he said he supports curbs on European Union migration, tariffs on Chinese steel and higher public spending. The future terms on which Britain will trade with both the European Union and all the countries with which it has negotiated trade deals on Britain’s behalf are uncertain. Domestic regulations on everything from finance to environmental protection may change.

All that uncertainty is amplified by the prospect of a second referendum on Scottish independence, which may this time be won.

The resulting downturn will cause the government’s budget deficit, already large, to swell. The pound’s depreciation, which might have been expected to boost exports, is unlikely to do much to cushion the blow. Its huge decline in 2008 failed to boost exports and Brexit will dent them.

The young, the higher educated and city dwellers, the most dynamic members of Britain’s economy, voted to Remain. They were outvoted by the old, the less educated and non-urban English, who often rely on taxpayer largess. With economic opportunities stunted, everyone will suffer for Leave voters wrongly blaming hard-working, taxpaying European migrants for everything they dislike about modern Britain and wrongly trusting economic charlatans like Mr. Gove.

Again, look at the British voters who voted to Leave and you see mirror images of Donald Trump's base.  They seek to do the same damage to America that the proponents of Leave have inflicted on Britain.  And, like Gove, Trump is a charlatan.