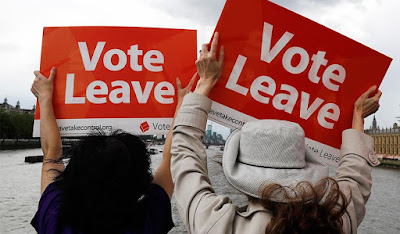 In my view, evangelical Christians are a toxic and dangerous element in America's civil society and political realm.  Almost by definition, evangelical Christians in America are at war against modernity and a diverse, knowledge based society.  Anything or anyone that threatens their childish, myth based belief system must be destroyed.  And if they resemble anyone in the New Testament, it is the Pharisees - those that Christ purportedly roundly condemned.  In short, they are a nasty group and a threat to decent and knowledge based society.  Indeed, they celebrate ignorance and idiocy.   In the wake of the disastrous Brexit vote in Britain, it should come as no surprise that evangelical Christians strongly supported leaving the European Union.  A piece in The Economist looks at  and this foul element and it support for a revolt against diversity and modernity.  Here are excerpts:

IN NORTHERN IRELAND, where a majority of citizens voted to remain in the European Union, there is a small but still significant share of the electorate who will be rejoicing over the result on religious grounds. Among some devoutly evangelical Protestants, the referendum has been viewed as a playing out of religious prophecy. The most widely quoted chapter is Revelations 18, in which an angel cries triumphantly that the evil empire of Babylon has fallen after "all the nations have drunk of the wine of the wrath of her fornication." The verse on which preachers have focused is Revelations 18:4.

And I heard another voice from heaven, saying: "Come out of her, my people, that ye be not partakers of her sins, and that ye receive not of her plagues."

In April, as campaigning for the referendum got underway, a conspicuous slogan urging people to vote for Brexit in the name of that verse appeared on a gable in Tigers Bay, a loyalist area on the north side of Belfast. In a small market town in the west of Northern Ireland, an evangelical group took over a premises on the main street and covered the front in posters urging people to vote "leave" or risk their souls by opting for a political institution which plainly stood for the Antichrist, an impostor whose appearance is a harbinger of the final battle before all earthly things come to end.

Using the eschatological parts of the Bible to denounce pan-European institutions is a long-standing trope in Ulster Protestant rhetoric. It was a recurring theme in the sermons of Ian Paisley, the preacher-politician who dominated Ulster Protestant politics for decades before striking a peace deal with his declared adversaries. He often alluded to Revelations chapter 17, which describes a depraved woman, the whore of Babylon, sitting upon a horrific, multi-headed, multi-horned scarlet-coloured beast. In Paisley's imagery, the Catholic church was the whore, and the European Union was the beast.

Such language is heard in ultra-Protestant circles elsewhere in the world, but Northern Ireland is probably the only place where it has come anywhere close to the political mainstream.