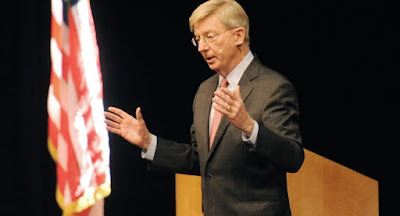 It has been sickening to watch one Republican after another swear fealty to Donald Trump and, in the process, jettison their last shreds of decency and morality.  The Republican Party has been increasingly morally bankrupt for years what with John McCain's selection of Sarah Palin as his running mate in 2008 and the increasingly visible efforts of the party to bring back a new Gilded Age with all of the abuses and inequities of the first one.  A time when the lives of most Americans were counted for nothing even as the wealthy indulged themselves in lives of shocking excess and greed. Yes, many like myself and virtually all of my extended family left the GOP rather than sell our souls, far too many were content to close their eyes and deny the growing ugliness all around them.  For these people even the rise of a dangerous narcissist with fascist desires like Donald Trump proved insufficient to make them open their eyes.  Thankfully, a few now seem to be belatedly doing so.  A case in point is George Will, a man I generally have come to disagree with.  Will, in an effort to retain some shred of decency has resigned from the Republican Party and is now registered as an independent.  Huffington Post looks at Will's defection.    Here are highlights:

Longtime conservative columnist George Will is wiping his hands clean of the Republican Party.

“This is not my party,” Will told PJ Media on Saturday. The Washington Post writer said a Democratic presidency would be better than the alternative offered by Donald Trump — who once called Will a “major loser.”

Will, who writes for the Washington Post, acknowledged it is a “little too late” for the Republican Party to find a replacement for Trump but had a message for Republican voters.

“Make sure he loses,” Will said of the presumptive GOP nominee. “Grit their teeth for four years and win the White House.”

His voter registration in Maryland has now changed from Republican to “unaffiliated,” PJ Media reported. The final straw was House Speaker Paul Ryan‘s (R-Wis) endorsement of Trump, he said.

In the meantime, Trump continues to fumble over himself. Just this week, he fired his campaign manager Corey Lewandowski before setting off to Scotland to promote his golf resorts.

“He had one good day because he didn’t vomit all over himself and gave a decent speech,” GOP consultant Matt Mackowiak said of Trump.

I find it interesting that it was Paul Ryan's endorsement of Trump that was the final straw for Will.  I have long found Ryan to be morally bankrupt and an utter hypocrite as he claims to be a deeply religious Roman Catholic even as he pushes an agenda that is the antithesis of Catholic social teaching.  Taking from the poor and giving to the rich has no place in the Gospel message.  Ditto for leaving poor working families to slowly die in the gutter.  In his own way, Ryan is every bit as evil as Trump.  The only difference is that unlike the ego driven Trump who has a tempestuous love affair with himself each day, Ryan knows what he is doing and simply doesn't care about the less fortunate or those who the GOP finds to be "other."