Quote of the Day: Why Not to Vote for Donald Trump 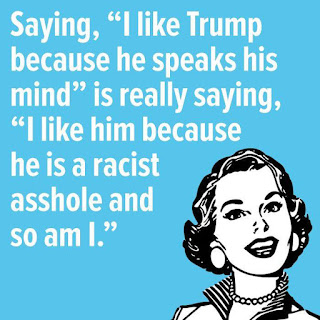 The number of conservatives and Republicans who are declaring their support for Hillary Clinton continues to grow,  In a piece at Real Clear Politics Mark Salter, the former chief of staff to Sen. John McCain and a senior adviser to the McCain for President campaign lets loose with an amazing take down.  Intellectually honest Republicans ought to admit that Salter is 100% correct.  Now is a time to put the best interest of the nation first.  Here are highlights:

There are many reasons to vote against Donald Trump. Let me cite the most obvious.

He’s an ignoramus whose knowledge of public issues is more superficial than an occasional newspaper reader’s. He casts his intellectual laziness as a choice, a deliberate avoidance of expert views that might contaminate his ill-informed opinions. He excused his failure to consult professionals before commenting on the Brexit vote by dismissing foreign policy advisers in general, including his own. “None of them are any good,” he said, as he likened running the world’s most powerful government and its foreign policy to opening a golf course.

He’s a charlatan, preposterously posing as a business genius while cheating investors, subcontractors, and his own customers. He’s rich because his father left him a great deal of money. He couldn’t turn a profit with a casino, for crying out loud. The epitome of someone who is famous for being famous, his business model consists mostly these days of selling his surname to a group of (often foreign) investors, who slap it on some vulgar monstrosity that consumers naturally associate with a vulgar reality TV celebrity.

He possesses the emotional maturity of a 6-year-old. He can’t let go of any slight, real or imagined, from taunts about the length of his fingers to skepticism about his portfolio. So shaky is his psyche that he’s compelled to fits of self-sabotage to defend his self-regard, as was the case in his racist, politically devastating attacks on U.S. District Court Judge Gonzalo P. Curiel. He views the powers of the presidency as weapons to punish people who’ve been mean to him – reporters, rival candidates, critics. “They better be careful,” he warns.

He’s a bigot or is pretending to be one in order to win votes from people who hold “others” to blame for the country’s problems and theirs -- other races, other religions, other classes. He asks nothing of his supporters’ patriotism. Just elect him and he’ll keep out the Mexicans and the Muslims, start trade wars with China and Japan, confiscate Middle Eastern oil and hey, presto, America’s great again. He doesn’t appeal to a single honorable quality or instinct in our society. He exploits fear and incites hatred. They are the emotions that impel him. He wants us to make our way in the world as he does: selfish, insecure, angry, scapegoating, small.

His election would endanger the security of the United States and our standing in the world. The widely respected geopolitical analysis firm, the Economist Intelligence Unit, declared his election a top 10 global threat. I believe President Obama has been the worst foreign policy president in my lifetime. But he’s Winston Churchill compared to Donald Trump.

Whatever Hillary Clinton’s faults, she’s not ignorant or hateful or a nut. She acts like an adult, and understands the responsibilities of an American president. That might not be a ringing endorsement. But in 2016, the year of Trump’s s campaign, it’s more than enough.

The slur against Obama and his foreign policy reputation should not go unanswered. Our allies are very much supportive of his behavior in office, which I believe is the gold standard for foreign policy success: