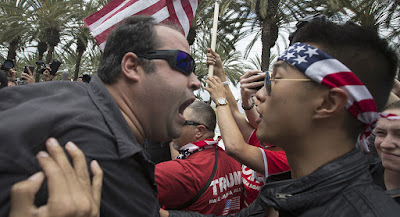 For many years the Republican Party has courted all of the ugliest elements of American society through its support for Christian religious extremism and the fanning of fears of delusional white supremacist/patriot groups.  Now, with the GOP convention within a few weeks and fascist in chief, Donald Trump, the presumptive GOP nominee, many of these lunatic elements plan on coming to Cleveland to either demonstrate or show their support for their version of the the Fuhrer.  Making things more tense is Ohio's "open carry law" - passed by Republicans, of course - that will allow many of the unhinged to come to Cleveland armed.  A piece in Politico looks at the possible circus and security nightmare that will likely ensue and certainly give political cover for GOP politicians who want to avoid the Convention and Trump at all costs.  Here are story highlights:

Hate groups are planning a visible presence among the thousands of protesters at the Republican National Convention. Police departments are raising flags about Cleveland’s preparedness to host the event. The committee organizing the convention recently warned that any last-minute changes to the city’s protest restrictions could make it impossible to guarantee conventiongoers’ safety. Then a judge threw out the plan.

It’s all forming a backdrop of uncertainty and anxiety less than three weeks before delegates congregate to nominate Donald Trump for president.

The Committee on Arrangements — the Republican Party’s convention-planning body — has yet to issue safety and logistical guidance to delegates, guests and media, who will be arriving in Cleveland en masse in two weeks. But they’ll be walking into the marquee event of a political cycle marked by intense polarization, racial tension and anger. Activists — both pro- and anti-Trump — will flood the streets of downtown Cleveland, sometimes simultaneously, and could create a volatile atmosphere for conventiongoers.


Williams said the city is likely to issue revised boundaries for its protest zone on Wednesday, and details have begun to emerge in local media. The original plan was tossed by U.S. District Court Judge James Gwin last week after the American Civil Liberties Union filed suit, claiming the zone was too restrictive. Gwin said the so-called event zone — where protesters can stage marches and hold rallies — was “unduly large” and imposed overbearing restrictions on the hours in which protesters could demonstrate.

The convention itself, held inside Quicken Loans Arena, will be protected by the Secret Service, which will form a “hard” perimeter in the immediate vicinity of the event. The Cleveland Police Department, with the aid of other departments from around Ohio and the country, will patrol the broader “event zone” throughout the downtown area.

Delegates will be shuttled to and from the arena from hotels that will be staffed with 24-hour security. Craig Dunn, a delegate from Indiana, said he anticipates similar levels of security to the 2012 GOP convention in Tampa, where he recalled passing through multiple security cordons — including one that searched his bus for explosives — and shuttling past boats mounted with machine guns.

It’s the streets themselves where tension will run highest. Cleveland’s protest zone, even in its revised form, will permit demonstrators to roam freely, so long as they don’t block pedestrian or vehicle traffic. That raises the prospect of pro- and anti-Trump groups meeting in the same vicinity. Groups like the anti-LGBT Westboro Baptist Church intend to rally, and a white supremacist group at the center of a violent outburst in California last week has pledged to show up in Cleveland too.

Bresler noted that firearms will be allowed in the “event zone” because of Ohio’s status as an open carry state, even though other more mundane items will be banned — from water guns to tape to sleeping bags.


I for one would not want to be anywhere near Cleveland.  I suspect that many residents are less than pleases to be hosting the convention.