FBI: No Corroboration That Orlando Shooter Was Gay 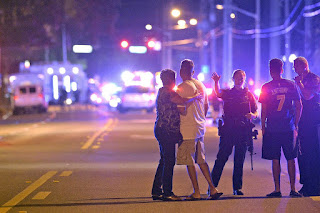 In the wake of the Orlando massacre at a gay night club, initial reports suggested that some had claimed to have seen the shooter at Pulse, the club targeted, and/or had seen him of gay dating and hookup apps.  The thinking was that perhaps his own self-loathing and inability to find self-acceptance of his sexuality may have helped him to commit the heinous act.  History is full of closeted, self-loathing gays who persecuted other gays.  J. Edgar Hoover is one such example and we have seen a cavalcade of closeted Republican politicians and right wing clergy seek to criminalize same sex relationships in a perverse reaction to their own demons.  However, to date, the FBI has found nothing to corroborate the false claims about the shooter's sexuality.  Here are highlights from the New York Times:

After news media reports suggested that the man who carried out the massacre at a gay nightclub here may have himself been gay, the company that bills itself as “the world’s largest gay hookup site” put out what amounted to a distress call, asking members who may have been in contact with the gunman, Omar Mateen, to come forward.

In an attempt to find an account connected to the killer, the site, Adam4Adam combed through the profile photos of every one of its 300,000 Florida members and researched 20 email addresses used by Mr. Mateen over the years that the company said had been provided by the F.B.I.  Adam4Adam came up with nothing.

“I think it was a hoax,” David Lesage, a spokesman for the Montreal-based company, said about the reports that Mr. Mateen had used Adam4Adam and other dating sites and apps for gay men.

Although federal officials have said Mr. Mateen had become radicalized to some extent online, at least half a dozen men have come forward with claims that hint at another potential motive, reporting that they had seen Mr. Mateen at gay clubs, encountered him online or had romantic encounters with him.

The claims have prompted investigators to look into whether Mr. Mateen, who had called 911 pledging allegiance to the Islamic State, was also a closeted gay man consumed by feelings of self-loathing and revenge.

F.B.I. investigators, who have conducted more than 500 interviews in the case, are continuing to contact men who claim to have had sexual relations with Mr. Mateen or think they saw him at gay bars. But so far, they have not found any independent corroboration — through his web searches, emails or other electronic data — to establish that he was, in fact, gay, officials said.

“While we are not at liberty to comment on any specifics, I can tell you that as of now, utilizing the information Jack’d has been provided, we have not been able to substantiate that Omar Mateen was a Jack’d user,” Mr. Dorta said.

Even if the shooter was not a self-loathing gay man, it is obvious that religion and the poison it legitimizes  played a major role in the blood shed.  As noted many times. religion is a toxic evil that continues to leave a trail of death and ruined lives.
Posted by Michael-in-Norfolk at Sunday, June 26, 2016

The Orlando shooter would be the greatest and worstest case of "Pray Away The Gay" ever, which is why I suppose no one wants this to be true.

Whether he was gay or not, the ugly role of religion and religious extremism was certainly a play.

Now that the FBI and the gay establishment have joined in inplying the witnesses are liars, now might be a good time for these guys to contact the blogs, at least the ones who haven't sold their sold their soul (and then some) to the pezzonovante and show us why they believe The Orlando shooter is or was gay and closeted.