When Will the Media Condemn All Homophobic Denominations? 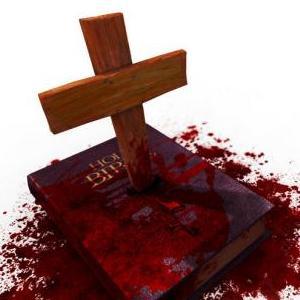 If one takes the time to research the origins of homophobia, it always eventually traces back to Christianity and some of the ugliest passages of the Old Testament.  While many are quick to point to Islam as the main source of anti-gay animus in the wake of the Orlando massacre of 49 gays and gay allies, that assessment is ultimately incorrect since Islam adopted the homophobia that increasingly permeated Christianity.  Before this adoption of Christianity derived animus, Islam was relatively tolerant of those of different sexual orientations.  And while much progress been made in many Christian denominations in terms of how LGBT individuals are treated, the root causes of anti-gay hatred and animus remain alive and well in the Bible and the Old Testament in particular.  This fact made clear after the Orlando horror as a string of "Christian" pastors lauded the murderous rampage and others could not even bring themselves to note the sexual orientation of the victims - and their own complicity in maintaining an anti-gay atmosphere in society.  A piece in the New York Times looks at this lingering poison that taints Christianity.  Here are highlights:

After the massacre in Orlando, Fla., American religious leaders spoke in a largely unified voice, condemning the killer and mourning the dead. But at some extreme conservative Christian churches, there was another message: good riddance.

In the weeks since 49 people were slaughtered at a gay nightclub, remarks by pastors celebrating the deaths have brought attention to several outposts of anti-gay hostility across the country that until now had been operating mostly under the radar.

“The tragedy is that more of them didn’t die,” Roger Jimenez, a Sacramento preacher, exhorted his congregants on June 12, the day of the assault. “The tragedy is — I’m kind of upset that he didn’t finish the job! Because these people are predators! They are abusers!”

Rebecca Barrett-Fox, a visiting assistant professor of sociology at Arkansas State University who has researched Christian extremists, said she had tracked about five churches — in California, Texas, Arizona and Tennessee — where preachers had endorsed the killings in Orlando.

Many of the preachers identify themselves as so-called independent Baptists, meaning that they are not a part of any of the denomination’s groupings, such as the Southern Baptist Convention. Dr. Barrett-Fox said the Baptist emphasis on church autonomy — recognizing no central authority — allowed pastors to interpret the Bible for themselves.

The independent Baptist churches where anti-gay hatred has flourished tend to have small congregations, more likely to number in the dozens than the hundreds, experts said.

Sermons posted online since the attack have been interspersed with dehumanizing labels for L.G.B.T. people reminiscent of those used by the perpetrators of historical genocides. The Orlando victims were “sodomites,” “reprobates,” “perverts” and “scum of the earth,” preachers have said.

The Southern Poverty Law Center, which tracks hate groups, said it was alarmed by the comments of extremist pastors after the mass shooting in Orlando. Heidi Beirich, the center’s director of intelligence, warned that they should not be dismissed as empty rhetoric.

“I think it is entirely possible that someone could be inspired by this and kill gay people,” Ms. Beirich said. “This kind of message is exactly akin to Hitlerian ideas of exterminating Jews. It’s that extreme. It’s basically genocidal toward a population.”

However, while many conservative Christian leaders no longer want to be seen as anti-gay, the change in tone should not be interpreted as full acceptance, Dr. Barrett-Fox said. The “love the sinner, hate the sin” approach to homosexuality continues to be deeply woven into Christian thinking.

When all is said and done, Dr. Barrett-Fox said, “They don’t really believe that these people had a right to be peacefully doing what they were doing, partying at a gay bar.”


The bottom line is that until denominations fully and loudly reject the "love the sinner, hate the sin" approach to LGBT people, they remain an enemy and a threat.  Until the theology is fully repudiated, we cannot be lulled into thinking "they're not really so bad"  This applies to the Southern Baptist Convention, the Roman Catholic Church (not withstanding Pope Francis' latest disingenuous statements) and many other denomination. Saying words of condolence when we are murdered doesn't wash away the guilt that comes from the failure to reject anti-LGBT dogma.  Dogma that is based on ignorance and Bronze Age levels of knowledge.
Posted by Michael-in-Norfolk at Tuesday, June 28, 2016