Donald Trump and the Self-Prostitution of Evangelical Leaders 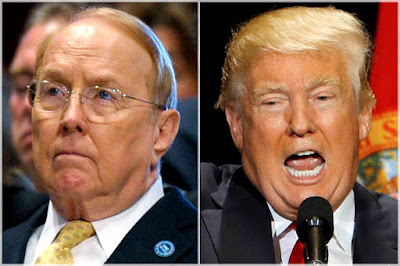 I had noted in a recent post how James Dobson had made the ludicrous statement that Donald Trump is a the equivalent of a "baby Christian" as part of the rationale for his decision - along with other evangelical extremists - to support Trump in the 2016 presidential election.  Once one stops either vomiting or laughing at the concept of Trump being even remotely a  Bible believe Christian, Dobson remarks reveal just how morally bankrupt the Christofascists have become and just how willing they are to prostitute themselves to someone like Trump in their never ending quest for power.  A piece in Salon looks at the moral sell out of Dobson, et al, and their true lover affair with access and power. Here are article highlights:

I’ve written quite a bit about Donald Trump’s unexpectedly successful wooing of the religious right in this presidential campaign. After all, we’ve been told for more than three decades now that conservative Christians require that America’s political leaders have the highest personal moral standards and adhere to a strict commitment to traditional values so he wasn’t expected to do well with them. Recall the stirring words of Focus on the Family’s James Dobson back in 1998 during the impeachment scandal:

As it turns out, character DOES matter. You can’t run a family, let alone a country, without it. How foolish to believe that a person who lacks honesty and moral integrity is qualified to lead a nation and the world! Nevertheless, our people continue to say that the President is doing a good job even if they don’t respect him personally. Those two positions are fundamentally incompatible

We are facing a profound moral crisis — not only because one man has disgraced us — but because our people no longer recognize the nature of evil. And when a nation reaches that state of depravity — judgment is a certainty.

There was Ralph Reed, formerly of the Christian Coalition and current leader of the Faith and Family:

”Character matters, and the American people are hungry for that message. We care about the conduct of our leaders, and we will not rest until we have leaders of good moral character.”

It’s fair to say that Donald Trump misses the mark on these requirements by a thousand miles.  With his three marriages, his history of public bragging about his sexual exploits and the size of his penis in the national media, and his obvious lack of even rudimentary knowledge of the Bible or any religious teachings, Christian or otherwise, he would seem to be the last person that people of strong faith would find acceptable.

But in the primaries, it became clear that he was drawing many of the voters Ted Cruz had counted on being in his corner. It’s not that Cruz didn’t get evangelical voters, it’s that he was only getting the ones who actually attended church.  . . . . it turns out that for a lot of people “evangelical” is itself just another cultural signifier like those boots and those pork rinds, a tribal designation rather than a serious adherence to Christian teachings.

That’s not to say that this particular group of self-identified evangelicals don’t believe in anything. They undoubtedly go to church from time to time and think of themselves as Christians. It’s just that they don’t actually live their lives in accordance to the Bible as Christian Right leaders have spent years indoctrinating the public to believe. They’re conservatives the way Donald Trump is conservative — authoritarian, intolerant and often cruel.

A Christianity constantly looking for political answers to moral and spiritual problems gives believers an excuse to blame other people when they should be looking in the mirror.

But then the Christian Right has long been a political operation rather than a religious movement, hasn’t it?

This brings us to Trump’s most recent “outreach” to the religious right which took place last week in New York when Trump met with a large group of Christian leaders to set their minds at ease about his candidacy. . . . . he also sold himself as someone who would protect “religious liberty”—  the latest social conservative buzzword — with his Supreme Court picks which seemed to thrill the assembled church leaders.

At the end of the meeting, Trump released a long list of religious right leaders as his “Evangelical advisory committee” including Richard Land of the Southern Baptist Convention, a man who has been scathing in his criticism of Trump. (He torturously explained that he would agree to serve Hillary Clinton too because that’s what Jesus would do.)

Not everyone is buying it. This evangelical scholar suggests that the real believing evangelicals are being played:

What happened on Tuesday in New York was the theo-political equivalent of money laundering.  Dobson and his gang are making Trump clean so that he is worthy of evangelical votes.

So, all those white working class types who identify as evangelical but don’t go to church are being seduced by Trump’s crude nationalism and nativism, largely as result of religious leaders politicizing religion and turning it into a vehicle for their own secular power.  Now, after years of lectures about morality and personal rectitude in public life, they’ve sunk so low that they’re actually trying to convince the truly devout weekly church goers that this depraved demagogue is someone they should support.

These people are making the spineless establishment Republicans look like saints by comparison.

When I look at Christian Right figures like James Dobson and Ralph Reed -  I met Reed years ago and he struck me as a conflicted closeted gay  and made my gaydar alarm go off the charts - it reinforces my desire to no longer call myself a Christian.  These foul people have become the face of Christianity and the so-called "good Christians" remain sitting on their hands doing little or noting to silence these hate merchants thus becoming by default complicit in the horrors they do and the harm they cause to so many.
Posted by Michael-in-Norfolk at Tuesday, June 28, 2016