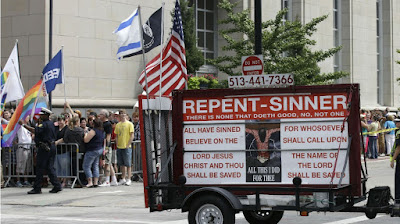 If nothing else, the Pulse massacre in Orlando has open the stage for an honest discussion about the role of Christianity and those I call the "good Christians" - i.e., akin the the "good Germans" at the time of Hitler's rise to power - bear in keeping anti-gay animus alive and well and socially acceptable at least among conservative and Republican Circles.  I call this Christians "Good Christians" because like their German counterparts of roughly 85 years ago, they stand by silently as their churches and pastors preach anti-gay hatred even as they themselves claim to not agree with the anti-gay diatribes.  Despite such protestations - almost always made in private conversations - these Christians continue to financially support the churches and "family values" organizations that daily promote hatred and reject modern knowledge in favor of a few passages written thousands of years ago by unknown authors who would be deemed utterly ignorant by today's standards.


In my view, it is far past time that these good Christians cease being given a pass and not confronted for their at best complicity in funding and supporting homophobic and typically dishonest denominations, church hierarchies, and pastors.  They need to either step up and be part of the solution or confronted for their role in keeping hate and homophobia alive.  Will these people like the confrontation?  Most definitely not because they, like most of us, don't like having to candidly analyze their beliefs and/or sheep like following of church leaders are who are noting less than foul. The favored phrase of  "love the sinner, hate the sin" needs to be challenged head on for the disingenuous bullshit that it is.  A piece in Think Progress looks at this ongoing support of hate and homophobia that must be challenged.  The harm caused goes far beyond creating an atmosphere where some feel free to murder those who are LGBT.  Here are article highlights:

In the immediate aftermath of the shooting at Orlando’s Pulse nightclub, Christian conservatives known to be anti-LGBT expressed sympathy for the victims and their families, suggesting that radical Islam was wholesale to blame for the attack. Many avoided mentioning that LGBT people were the victims — at least until a few days later, when they began reminding everybody what they truly think about gay people.

“Yes, we can oppose gay marriage and still oppose the slaughter of gays,” Steve Pauwels insisted at BarbWire.

“Yes, Christians do believe homosexual actions are sinful. But we also believe that mass shootings are sinful, and lying is sinful, and gossip is sinful, and so are laziness, torture, theft, rape, dishonesty, abuse,” Mary Tillotson argued at The Federalist. “As a Catholic, I go to confession about once a month to repent, seek mercy, and renew my own commitment to rid myself of sinful behavior. We all sin.”

“It is true that many Christians hold to the Bible’s teaching on the sinfulness of homosexuality and that upsets some gays,” wrote Rick McDaniel at the ChristianPost. “But here is an opportunity to simply receive love and support and it is rebuffed.”

There’s a reason it is rebuffed.  Conservative Christians have long argued that their condemnations of homosexuality are couched in love, complete with the catchy slogan, “love the sinner, hate the sin.” But that message — that homosexuality is a sin — is harmful in and of itself.

Countless studies have assessed the impact of various forms of stigma and discrimination against LGBT people. The negative consequences of discrimination, bullying, and family rejection are well documented, but fewer studies have actually looked at the direct effect of religious condemnations of homosexuality.

Studies on ex-gay therapy, also known as sexual orientation change efforts (SOCE), shed some light on what happens when gay people directly interact with religious beliefs that reject their identities. Often times, the people seeking SOCE are trying to reconcile who they are with their own beliefs.

In 2009, the American Psychological Association (APA) issued a comprehensive report rejecting the effectiveness of SOCE based on all available research.  . . . .  The report then explained how the research had found that all of these struggles came with mental health consequences. Individuals felt culpable, unacceptable, unforgiven, disillusioned, and great emotional distress — feelings that were associated with anxiety, panic disorders, depression, and suicidality. And notably, these consequences occurred “regardless of the level of religiosity or the perception of religion as a source of comfort and coping.”

Survivors of ex-gay therapy have confirmed these consequences with their own stories. In an informal survey conducted by the organization Beyond Ex-Gay in 2013, 92 percent of people who had undergone SOCE reported experiencing harm as a result. Besides the fact that the treatments didn’t actually work to change their orientation, the respondents said that trying to “pray away the gay” caused them to experience shame, depression, fear, anger, lowered self-esteem, feelings of failure, and even suicidal thinking.
According to [Dr. Doug] Haldeman’s [clinical psychology doctoral program at John F. Kennedy Universityb] oservations, “The messages — ‘You are of less value,’ ‘You are disordered,’ ‘You are somehow an inferior person’ — either directly or implied by these anti-gay statements — have a negative effect on everybody who experiences them. You don’t even have to go through conversion therapy to have some of the sequelae of having internalized these effects.”

Like Tillotson wrote, many religious conservatives try to justify condemning homosexuality as a sin with equivocating statements about how “we’re all sinners,” but this does little to soften the blow.

First, the comparison to other actions treats a person’s sexual orientation like it’s a choice, a hypothesis that science has roundly rejected. The attempt to compare homosexuality to more common sins like lying, laziness, and gossip may be an attempt to downplay the severity of homosexuality, but it actually disproves its own point. LGB people are singled out for condemnation and ostracization from society, while liars, sloths, and gossips — i.e. just about everybody — are not. Likewise, comparing homosexuality to sins that actually hurt people, like theft and murder, communicates that LGB people deserve as much scorn as criminals — and in many countries, they are treated as such.

In reality, U.S. religious conservatives do single out homosexuality for condemnation. Stephen Kim, an evangelical pastor in New York, took this approach in his response to the Orlando shooting. “As Christians, we grieve today,” he wrote, “not so much because people died (for we will all one day die) — but because fifty souls went straight to Hell without any further opportunity for repentance.” They died in the midst of committing a sin, and thus “they did not die as heroes. Instead, they died as depraved sinners. Maranatha!”

Dr. Ilan Meyer, who has long studied the impact of minority stress on the LGBT community at the Williams Institute at UCLA's School of Law, told ThinkProgress that "the message that homosexuality is a sin is not really simple. It is at the core of homophobia." Because it's an explicit tenet instead of just a prejudice, it creates the sense that nobody is really to blame for the harm that belief causes.

It affects, really, every waking hour in one way or the other." Every single time a gay person caught in that thought loop sees a person who they might find attractive — or even just thinks about such a person — they are reminded of that condemnation and the notion that there is something wrong with them. As the therapist whose job it was to try to help end that thought loop, Haldeman confirmed that the internal effects are "devastating."

Perhaps the most important — if unsurprising — finding from Ryan's research is that the least accepting families tend to be the most religious. "Religiosity was really at the core of the kinds of behaviors that families engaged in to respond to having an LGBT child."

Indeed, a 2014 study found that LGB people who lived in anti-gay communities had a life expectancy that was 12 years shorter than those who lived in more welcoming communities. Incidentally, those with anti-gay attitudes also had shorter life expectancies. The same researchers had found a few years prior that LGB teens experienced a significantly higher risk of suicide simply for living in a more conservative community.


As noted, these "good Christians" need to be confronted and challenged.  Silence equals complicity in the horrors.  They cannot say that they are not anti-gay while remaining in and financially supporting anti-gay denominations and churches. They don't get to have it both ways.