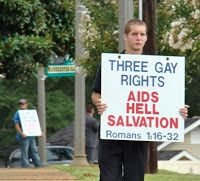 As I have noted in various posts over time, homophobia ALWAYS traces back to Christianity and ignorant batshitery in the Old Testament written by Bronze Age herders who due to ignorance and a desire to be different from surrounding cultures that imposed a harsh condemnation of same sex sexual relations - the ignorant authors did not even have an understanding of homosexuality in its modern meaning.   This Old Testament poison was picked up and spread across the globe by Christian missionaries and by British imperialist as they conquered territories.  Even Islam became more homophobic and less tolerant of  sexual fluidity thanks to the prudish British.  Now, in the wake of the Orlando massacre, a few Christians are beginning to speak out about Christianity's responsibility for homophobia and the continued mistreatment of LGBT individuals.  A piece in Baptist News Global went so far as to make the case that Christians owe reparations, especially on the spiritual front, to the LGBT community.  Here are excerpts:

One of the encouraging responses I have witnessed in the wake of the mass shooting at the gay nightclub Pulse in Orlando is the admission of guilt on behalf of some churches and religious leaders, recognizing that the perpetuation of our theological messages about LGBTQ people over the years has been death-dealing. Many have seen anew the connection between anti-LGBTQ theological narratives and the perpetuation of violence against LGBTQ people in society. Others now recognize that even our silent complicity in this spiritual violence has a high cost.

[A]nti-LGBTQ violence is fueled by theological narratives. In sum, for generations, the denigration of LGBTQ people has appealed for validation to the most powerful language and symbols available to humanity, setting messages of scorn within an ultimate context by conscripting sacred text and even the mind of God in the justification of oppressive activity. The theological maligning of LGBTQ lives makes it easy to know who it is theologically appropriate to hate, whose bodies are fitting targets for violence, and whose souls even God couldn’t care less about.

For LGBTQ people, the mechanisms of oppression have nearly always been waged first against our souls. But it never ends there. This spiritual violence has led to innumerable suicides, hate crime violence beyond what we know through the collected statistics, and the marginalization of LGBTQ people in the very institutions they should feel most at home: their families, their churches, and their communities.

Feeling remorseful for this history of theological violence against LGBTQ souls isn’t enough to cultivate spiritual and physical wellbeing for new generations of LGBTQ teens, or to make our churches more welcoming spaces for the fullness of LGBTQ lives, or to heal the deep wounds of our religious institutions wrought by severing parts of our collective body asunder through spiritual violence. Rooting our response in the gospel, our call is not simply to feel guilt over past harm or even to ameliorate of future harm, but to heal the wounded and bind up the broken and to become repairers of the breach we have created. In the case of battles waged against the souls of queer folk, our reparations for wrongdoing must address the ways we’ve spiritually and theologically structured our lives and institutions to marginalize, silence, and spiritually harm LGBTQ people for generations and to repair the damage wrought by this violence.

Email ThisBlogThis!Share to TwitterShare to FacebookShare to Pinterest
Labels: Baptist, Bible as a message of hate, Orlando, Pulse, religion as justification for evil, religious based bigotry, reparations

more like royalties. for pete's sake, if it weren't for gays, evangelicals would be NOWHERESVILLE! they owe us, for certain, but let's collect on the fact that we made a name for these bastards!