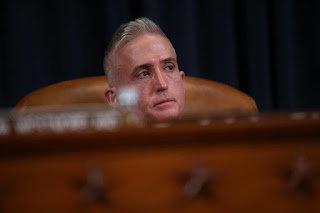 For anyone getting their news from any source other than Fox News it should have always been a foregone conclusion that the GOP House Committee on Benghazi would turn up nothing.  The whole endeavor was never about finding some undiscovered truth but, instead, about inflicting political harm on Hillary Clinton and damaging her presidential run for office.  Seven other committees had found no smoking gun or anything else harmful to Clinton or the Obama administration and only deranged Hillary haters should have or could have expected a different result.  Oh, and did I mention the far higher losses of life on the watches of Ronald Reagan and Chimperator Bush which never were given such an exhaustive investigation?  It is unfortunate that the GOP members of this witch hunt do not have to personally repay the sums wasted for no legitimate reason.  The Washington Post blasts the committee in a main editorial  Here are excerpts:

ON THE night of Sept. 11 and morning of Sept. 12, 2012, U.S. diplomats and intelligence officers in Benghazi, Libya, came under attack by terrorists armed with automatic weapons, mortars and fuel to start fires. By the next morning, four brave Americans lay dead — Ambassador J. Christopher Stevens; his aide, Sean Smith; and two former Navy SEALs providing security, Tyrone S. Woods and Glen Doherty. It was a horrific crime whose perpetrators remain for the most part unidentified and unpunished — and a setback for U.S. foreign policy in the wider Middle East.

As if all of that weren’t bad enough, the Benghazi attacks mutated into yet another of the partisan dramas that U.S. politicians — in this case Republican politicians — generate in lieu of constructive policy making. Unable to turn the events to their advantage when they occurred, during the 2012 election campaign, Republicans have persisted in attempting to milk the “scandal” for the past four years. They have done so even though repeated previous investigations — including by a GOP-led House intelligence panel — found nothing to contradict the Obama administration’s basic account.

And now, after two years and $7 million, comes Tuesday’s final report of a Republican-led House select committee, which adds exactly nothing substantial to the story. It’s true that the panel’s investigation did, along the way, help trigger the revelation of then-Secretary of State Hillary Clinton’s private email server, which is a real issue. On the most sensitive point, however — Ms. Clinton’s personal culpability for what happened in Benghazi — the committee came up empty.

Yet for reasons best known only to themselves, Republicans have insisted on pursuing their own more inflammatory and conspiratorial version of events. Maybe someone should investigate that.


Ironically, at the same time Vanity Fair is running a piece that looks at the Stevens family's request that Hillary Clinton cease being blamed for the tragedy that claimed the life of their family member.  Odd how they have less of an agenda than sleazy Republicans obsessed with inflicting political harm on Ms. Clinton.  Here are article highlights:


Democrats on the House Committee released their own, three-hundred-and-thirty-nine-page report on Monday. They also cited “woefully inadequate” security in Benghazi. But they claimed to have been virtually shut out of the official Committee report. They called the probe, led by the South Carolina Republican Trey Gowdy, a witch hunt. “Gowdy has been conducting this investigation like an overzealous prosecutor desperately trying to land a front-page conviction rather than a neutral judge of facts seeking to improve the security of our diplomatic corps,” the report said.

Dr. Anne Stevens, the sister of Ambassador Chris Stevens, has served as a family spokesperson since his death. She is the chief of pediatric rheumatology at Seattle Children’s Hospital. We spoke twice in the past three days, including shortly after the House Select Committee report was issued. Dr. Stevens recalled that her brother had been fascinated by the Middle East since childhood, when he dressed up as Lawrence of Arabia, with a towel and a pot atop his head. He served in the Peace Corps, in Morocco, before joining the Foreign Service, and he served twice in Libya before his final posting there, as well as in Damascus, Cairo, Jerusalem, and Riyadh. My interview with Dr. Stevens has been condensed and edited for clarity.

Whom do you fault for the lack of security that resulted in the death of your brother, in Benghazi?It is clear, in hindsight, that the facility was not sufficiently protected by the State Department and the Defense Department. But what was the underlying cause? Perhaps if Congress had provided a budget to increase security for all missions around the world, then some of the requests for more security in Libya would have been granted. Certainly the State Department is underbudgeted.

I do not blame Hillary Clinton or Leon Panetta. They were balancing security efforts at embassies and missions around the world. And their staffs were doing their best to provide what they could with the resources they had. The Benghazi Mission was understaffed. We know that now. But, again, Chris knew that. It wasn’t a secret to him. He decided to take the risk to go there. It is not something they did to him. It is something he took on himself.

After years of congressional investigations, do you feel that your brother’s death has been politicized in Washington?

Yes! Definitely politicized. Every report I read that mentions him specifically has a political bent, an accusatory bent. One point that seems to be brought up again and again is the accusation that the attack was a response to the video. I could understand why that conclusion would be made, because it was right after the attack on the U.S. Embassy in Egypt. But, frankly, it doesn’t matter that that was the thinking, that night, about why the attack occurred. It’s irrelevant to bring that up again and again. It is done purely for political reasons.

The take away is that the next time you hear some Republican apologist whining about Benghazi, what you need to do is ask them to their face when they plan on having a tattoo that says "I'm an idiot" placed on their forehead. .