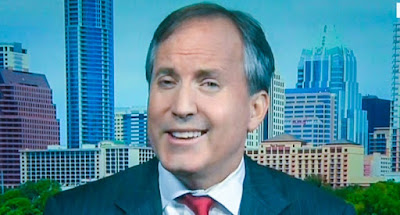 With Texas Republicans there seems to be a contest as to who can be the most anti-gay - - and the most corrupt.  Former Governor Rick Perry is already facing serious allegations and now Texas Attorney General Ken Paxton who has encouraged rogue clerks to refuse to issue marriage licenses to same couples is facing possible  felony charges for securities fraud.  Not surprisingly, Paxton is a darling of the lunatic Tea Party and Christofascists who hold sway in the Texas GOP.  The Raw Story looks at yet another possible corrupt Republican in Texas.  Here are highlights:

Special prosecutors will ask a Texas grand jury as early as this month to indict the state’s attorney general on first-degree felony charges for suspected securities laws violations, one of the prosecutors said on Thursday.

A spokesman for Attorney General Ken Paxton, a Republican who came to office earlier this year with strong Tea Party support, was not immediately available for comment.

“There is evidence that needs to be presented to the grand jury about a couple of different violations. One of which that they will have to determine is if securities fraud was present,” said attorney Kent Schaffer, appointed to investigate the suspected violations.

When Paxton was in the legislature, he was hired to seek clients by an investment firm called Mowery Capital Management, which is facing allegations from the State Securities Board of defrauding investors.

The Texas State Securities Board in May 2014 found that Paxton was not properly registered as an investment advisor in his work with the firm. It reprimanded him and fined him $1,000.

The special prosecutors, appointed earlier this year, have been looking into possible criminal violations stemming from Paxton’s role with the firm and his failure to properly register as an advisor.

A first-degree felony conviction in Texas can result in 5 to 99 years in prison.