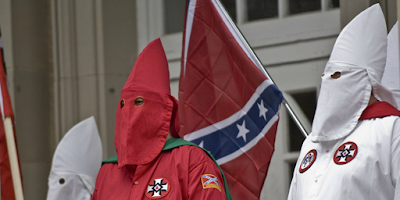 Try as they might to distance themselves from racists and white supremacists, the Christofascists are finding the effort difficult.  Now, the Klu Klux Klan is making the effort even more difficult as it announces that it will rally at the South Carolina capitol to defend the Confederate flag and to promote "White Christian Nation."  I have often maintained that if you scratch beneath the surface of most supposed Christian "family values" organizations you will find a bunch of would be segregationist and white supremacists.  That holds true for Family Research Council or The Family Foundation here in Virginia.  Patheos.com looks at situation in South Carolina.  Here are highlights:


However, despite Governor Haley’s protests, Brian Gaines, spokesman for the South Carolina Budget and Control Board, confirmed the rally, noting the state provides rally space at the Statehouse site when space is available or previously not reserved.


The KKK rally promoting a “White Christian nation” and defending the Confederate flag will take place a month after Dylann Roof entered a historic church in Charleston and shot to death nine African-Americans during a Bible study meeting last month.


On their website, the Loyal White Knights of the Ku Klux Klan claims Southern whites are facing “cultural genocide” while insisting they are not a “hate group.” The group insists that the KKK is all about obeying “God’s law,” and restoring “America to a White Christian nation founded on God’s word.”  The following is an excerpt:

We hate drugs, homosexuality, abortion, and race-mixing because these things go against God’s law and they are destroying all white nations. But rather than focus on hate, we try to focus on the love of our race. Love for our God and Country. Our goal is to help restore America to a White Christian nation founded on God’s word.

It sounds almost the same as the agenda on the websites of FRC and TFF.  Conservative Christianity is truly something ugly.
Posted by Michael-in-Norfolk at Wednesday, July 01, 2015