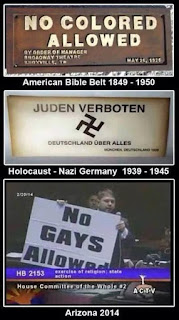 It seems the Christofascists and their allies have little desire to cease pushing their specious "religious liberty" claims through which they seek to exempt themselves from compliance with non-discrimination laws and even having to serve those they don't like even if they are governmental officials.  This tactic is actually nothing new and in the 1968 decision of the Supreme Court in Newman v. Piggie Park Enterprises, the Court rejected the claims of a barbecue chain that claimed that it could refuse to serve black people (in violation of an anti-discrimination statute) because the owner’s “religious beliefs compel him to oppose any integration of the races whatever.”  The Court, in fact, allowed the plaintiffs to recover attorneys fees against the restaurant chain.  A piece in the Washionton Post looks at the Christofascist demand for special rights under the deceptive claim of "religious liberty."  Here are highlights:


Don’t like same-sex marriage, contraception, HIV testing or even child labor laws? Never you worry: Just say that a higher power has exempted you, even if your exemption means trampling on other people’s rights.

Texas’s attorney general recently encouraged public officials to deny same-sex couples marriage licenses if doing so violated their religious convictions. Other state politicians and companies have also recently tried to cite religious belief as an excuse for refusing to serve gay men and lesbians or to treat them equally under the law, even in states where sexual orientation is a legally protected class.
“Religious liberty” has been invoked to circumvent other laws, too.

“Religious liberty” torchbearers speak as if there is a rich tradition of accommodating any citizen who says that a law burdens her faith, regardless of the societal fallout. But the actual history of religious accommodation looks different.

[R]eligious exemptions to laws have been granted only within very prescribed bounds — including the principle that you’re entitled to religious accommodations only if they don’t burden or harm others, or otherwise create havoc in the legal system.

[I]n 1985 the court also struck down a different state law requiring employers to honor whatever holy day their workers chose. Why would the court say that workers’ holy days deserved deference in one case and not another? The government has to allow you to practice whatever religion you choose — and observe whatever holy day you wish — but it will not protect your right to excessively burden other citizens (here, employers and co-workers who must accommodate your schedule) in the name of that religious belief.

The court has used similar logic when considering whether faith can exempt people from civil rights and public accommodations law. Bob Jones University lost its tax-exempt status because it refused to admit students engaged in or advocating interracial relationships. The school had claimed that it should be exempted from anti-discrimination law because its leaders “genuinely believe[d] that the Bible forbids interracial dating and marriage.”

In the case perhaps most directly comparable to the latest arguments made about religious liberty and gay customers, 1968’s Newman v. Piggie Park Enterprises, the Supreme Court affirmed the principle that a barbecue chain could not refuse to serve black people, in violation of an anti-discrimination statute, simply because the owner’s “religious beliefs compel him to oppose any integration of the races whatever.”

Constitutional and statutory protections of religious liberty give Americans the right to worship whomever they choose, however they like, on whatever day they like. But there are well-established limits to weaponizing those beliefs against your fellow man.

Fundamentalist religions and those who use religion to harm others and deprive them of their rights are a plague on the world.  They and their claims need to be rejected and tirelessly opposed.
Posted by Michael-in-Norfolk at Friday, July 03, 2015