To my surprise Huffington Post has a piece extolling last weekend's Hampton Roads 2015 Pride Fest  in a piece that ought to make both the Pride board and the City of Norfolk - which has finally awakened to the fact that the event has the potential to be a real tourism draw, hence the City's cooperation in moving the Block Party into Scope due to threatening weather - very proud.  The piece is full of great photos and nice things about the event and certainly gives the event some great national exposure.  Here are some article highlights:

This year I had a strong desire to attend a unique and rare style of pride event, especially in light of the landscape-altering decision by the United States Supreme Court, forever altering America's social contracts.

Norfolk is synonymous with boats. It's the home of largest naval base in the world, Naval Station Norfolk, and the final resting position of the Wisconsin . . . . . The Wisconsin, a WWII and Korean Conflict battleship punctuates the Norfolk skyline and helps to educate future generations as a fully functional museum ship.

The floating festivities are open to everyone. If you own a boat you're more than welcome to get a permit, color her up, and ride in the parade. If you aren't lucky enough to have your own boat, join someone else's! If you're plagued by the devil that is sea-sickness, get yourself an inflatable swan and watch the parade from the safety of a mimosa on the waterfront! 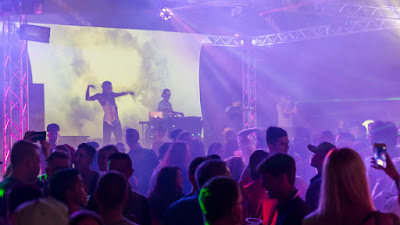 The annual Pridefest Block Party had a seamless run even after a last minute venue change prompted by Mother Nature's insistence on hydrating the land. That's coordination at its finest, moving the party at the last minute, and still having everyone show up. Well done!

What I was most proud of at Hampton Roads Pridefest was the next generation of Americans. These are folks who're going to grow up in the environment we leave to them, and they're in many ways better prognosticators than we were.

In all seriousness, the City of Norfolk - and other local cities - need to advertise the event which is steadily becoming a week long event.  Interestingly, at the event the mayor of Virginia Beach suggested that perhaps Pride should consider Virginia Beach as a future venue for the event.  The times are changing!