Next Fight for Gay Rights: Discrimination in Employment and Housing 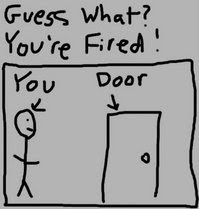 As noted yesterday, one of the somewhat overlooked aspects of the Obergefell ruling on Friday was the statement that sexual orientation is an immutable characteristic.  This may prove powerful in the next stage of the gay rights battle: gaining nationwide protections from employment and housing discrimination.  Here in Virginia, LGBT individuals can be fired at will by anti-gay bigots and the victim of the discrimination has ZERO legal protections under state law (as I found out personally when a Virginia Beach based law firm - the initials of the name are WR -forced me out for being gay).  Likewise, LGBT Virginians have no state law protections from housing discrimination.  For the most part, the situation is no better in 28 other states. We can sadly expect the Republican Party to oppose such protections every step of the way as it continues to whore itself to Christofascists. A piece in the New York Times looks at these coming battlefield issues.  Here are highlights:

Exhilarated by the Supreme Court’s endorsement of same-sex marriage, gay rights leaders have turned their sights to what they see as the next big battle: obtaining federal, state and local legal protections in employment, housing, commerce and other arenas, just like those barring discrimination based on race, religion, sex and national origin.

The proposals pit advocates against many of the same religious conservatives who opposed legalizing same-sex marriage, and who now see the protection of what they call religious liberty as their most urgent task. These opponents argue that anti-discrimination laws will inevitably be used to force religious people and institutions to violate their beliefs, whether by providing services for same-sex weddings or by employing gay men and lesbians in church-related jobs.

Nationally, anti-discrimination laws for gay people are a patchwork with major geographic inequities, said Brad Sears, executive director of the Williams Institute at the School of Law of the University of California, Los Angeles. “Those who don’t live on the two coasts or in the Northeast have been left behind in terms of legal protection,” he said.

As they push for more state and local safeguards, rights advocates are also starting a long-term campaign for a broad federal shield that would give sexual orientation and gender identity protected status under the Civil Rights Act of 1964.

The goal is to achieve overlapping local, state and federal laws, an approach that has proved effective in curbing other kinds of discrimination, said Sarah Warbelow, legal director at the Human Rights Campaign, a gay rights advocacy group. Visible laws can not only permit lawsuits, she said, but also deter employers and others from biased behavior.

Although a majority of states lack such protections, federal orders and court decisions, especially in employment, are gradually offering more safeguards.

[T]he Equal Employment Opportunity Commission, charged with enforcing federal law in the workplace, has determined that discrimination against gay men, lesbians and transgender people amounts to illegal sex discrimination under Title VII of the Civil Rights Act, and it is bringing or endorsing lawsuits under that provision.

That application of existing law is still being tested in court and is more established for transgender workers than for gay and lesbian workers. In the past two years, the agency has successfully pursued 223 cases involving gay or transgender people who faced workplace harassment or other discrimination, gaining settlements or court orders, . . . .

“People are going to realize that you can get married in the morning and be fired from your job or refused entry to a restaurant in the afternoon,” Mr. Merkley said. “That is unacceptable.”
But the effort will take years, he said, because it appears unlikely that Republican committee heads in Congress will advance such a bill.

In the emerging state-by-state battles for anti-discrimination laws, the strongest opposition has come from conservative religious groups . . .

The major gay and civil rights groups are united in their opposition to “religious liberty” bills, a priority of conservative Christian advocates, which would allow religious vendors to refuse to serve gay couples or wedding celebrations.

“It’s profoundly harmful to walk into a business open to the public and be told, ‘No, we don’t actually serve your kind here,’ ” he said. “That’s not how America works.”