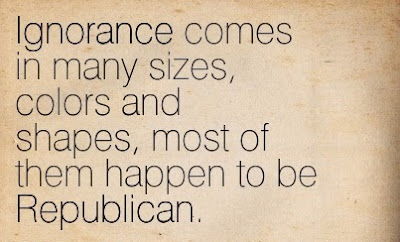 Nowhere in America is the embrace of ignorance and anti-intellectualism higher than in the Republican Party base, particularly among the Christofascists and Tea Party elements, which are largely one and the same.  Indeed, the embrace of ignorance and the rejection of science, knowledge and intellectualism is down right celebrated - all as the rest of the world, outside of perhaps Islamic nations and and heavily Christian areas of Africa, is moving forward and embracing modernity and knowledge.  The Founding Fathers embraced knowledge and intellectualism.  Today's GOP abhors these things.  As a piece in Psychology Today notes, the rise of anti-intellectualism is harming America and the nation's future.  Here are article highlights:

The tragedy in Charleston last week will no doubt lead to more discussion of several important and recurring issues in American culture—particularly racism and gun violence—but these dialogues are unlikely to bear much fruit until the nation undertakes a serious self-examination. Decrying racism and gun violence is fine, but for too long America’s social dysfunction has continued to intensify as the nation has ignored a key underlying pathology: anti-intellectualism.

America is killing itself through its embrace and exaltation of ignorance, and the evidence is all around us. Dylann Roof, the Charleston shooter who used race as a basis for hate and mass murder, is just the latest horrific example. Many will correctly blame Roof's actions on America's culture of racism and gun violence, but it's time to realize that such phenomena are directly tied to the nation's culture of ignorance.

In a country where a sitting congressman told a crowd that evolution and the Big Bang are “lies straight from the pit of hell," where the chairman of a Senate environmental panel brought a snowball into the chamber as evidence that climate change is a hoax, where almost one in three citizens can’t name the vice president, it is beyond dispute that critical thinking has been abandoned as a cultural value. Our failure as a society to connect the dots, to see that such anti-intellectualism comes with a huge price, could eventually be our downfall.

An anti-intellectual society, however, will have large swaths of people who are motivated by fear, susceptible to tribalism and simplistic explanations, incapable of emotional maturity, and prone to violent solutions. Sound familiar?

What Americans rarely acknowledge is that many of their social problems are rooted in the rejection of critical thinking or, conversely, the glorification of the emotional and irrational. What else could explain the hyper-patriotism that has many accepting an outlandish notion that America is far superior to the rest of the world? Love of one’s country is fine, but many Americans seem to honestly believe that their country both invented and perfected the idea of freedom, that the quality of life here far surpasses everywhere else in the world.

But it doesn’t. International quality of life rankings place America far from the top, at sixteenth. America’s rates of murder and other violent crime dwarf most of the rest of the developed world, as does its incarceration rate), while its rates of education and scientific literacy are embarrassingly low. American schools, claiming to uphold “traditional values,” avoid fact-based sex education, and thus we have the highest rates of teen pregnancy in the industrialized world.
And those rates are notably highest where so-called “biblical values” are prominent. Go outside the Bible belt, and the rates generally trend downward.

[T]he impact of fundamentalist religion in driving American anti-intellectualism has been, and continues to be, immense.   Interestingly, anti-intellectual fundamentalists are joined in their climate change denial with unusual bedfellows: corporate interests that stand to gain from the rejection of sound science on climate.  . . . these corporate interests encourage anti-intellectualism, conditioning Americans into conformity and passive acceptance of institutional dominance. They are the ones who stand to gain from the excessive fear and nationalism that result in militaristic foreign policy and absurdly high levels of military spending.

At the core of all of this dysfunction is an abandonment of reason. More on this subject in David Niose's latest book, Fighting Back the Right: Reclaiming America from the Attack on Reason

The far right is the walking, talking embodiment of crazy. The definition of crazy is doing what has never worked before and expecting it to work this time.