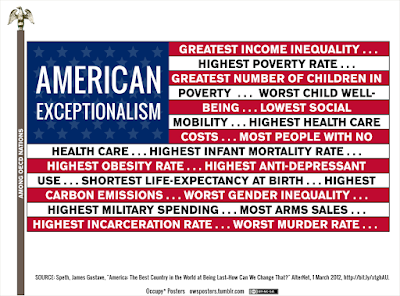 Having traveled the world a bit, one thing that drives me to distraction is the myth of "American exceptionalism."  As a prior post notes, the USA ranks 16th based on quality of life indexes, we have the most expensive yet least efficient healthcare system of and advanced nation, social mobility is plummeting, . . .  the list of America's shortcomings goes on and on.  Yet we see people - most generally Republicans, Christofascists and Tea Party types, although Democrats are not free from blame  - blathering on and on about American exceptionalism and America's special place in God's plan.  This ignorance and blindness to reality has serious consequences as examined in a piece in Salon that interviews Andrew Bacevich, a West Point graduate who served a tour in Vietnam before taking a doctorate in diplomatic history at Princeton, before teaching international relations at West Point and Johns Hopkins and Boston University.  Bacevich credits much of America's disasters in the Middle East on the delusion of American exceptionalism.  Here are excerpts:

[U]nlike the period of the Cold War, when you can make an argument that there was a certain cohesion in U.S. policy, there’s been virtually none with regard to the Greater Middle East. What we have is almost a pattern of random military interventionism justified by all kinds of reasons, few of which have produced anything like a positive outcome, and which cumulatively contributed to the destabilization of the Greater Middle East. . . . An American imperium bent on incessant expansion and more or less global dominance. . .

[T]he preliminary point is to understand where this urge to create a global imperium came from. And several facts contributed. One of which is the long-standing, deeply embedded claim of American exceptionalism, which assigns to us a responsibility to transform the global order in our own image. That goes back to the founding of Anglo-America, the City upon a Hill.

The end of the Cold War persuaded American elites in both parties, people on the left and people on the right, that liberal democratic capitalism was destined to triumph everywhere, that the last ideological challenger had been vanquished.

The end of history is set. So that seemed to bring the vision of global hegemony that much closer. Desert Storm seems to demonstrate—this is not so inaccurate, misleading—that the United States is in possession of military powers such that the world has never seen. We believe by 1991 that we have not only vanquished the last standing ideological opponent, but that we have achieved a military supremacy.

They don’t use the term “empire,” but it is an imperialistic rhetoric, and you also find, under Clinton, a growing willingness to put that American military power to use. To do what Clinton would argue would be good things in the world. And that takes the form of a far greater willingness to intervene. In Somalia, in Haiti, in Kosovo, in Bosnia, with the expectation that somehow this interventionism is going to produce stability, spread our values, help to bring into existence this new American-dominated order. Problem is, of course, that the results are considerably different. Instead of creating stability we create instability, and, of course, the chickens come home to roost on 9/11, with the attacks on Washington and New York.

I am certainly not optimistic about our willingness to learn.

One of the great obstacles to rethinking U.S. foreign policy is the extent to which both of the major parties buy into, I think for mostly cynical reasons, the premises of American exceptionalism. So here we are, you and I are speaking. We’re in sort of the preliminary stages of the 2016 presidential campaigns, and it is not difficult to predict that from both sides we will hear calls for American leadership. The insistence that there is no alternative to American leadership, the promises of sustaining American strength. . . .

There was an argument that we needed to depose Saddam Hussein because he was a cruel and oppressive dictator, but the consequences of deposing Saddam Hussein have not actually been very positive . . . . we have, through our efforts in that country, produced instability, killed people, displaced people, and contributed to such vast human misery as to make a mockery of the humanitarian claims that, to some degree, provided the rationale for invading the country in the first place.

[H]ere as we sit, we are once more, whether we like it or not, involved in an Iraq war. The very fact that this new Iraq war has begun indicates that the previous Iraq war of 2003 to 2011 was a failure. A costly failure. A many-trillion-dollars failure. And yet, there is astonishingly little public interest in requiring any kind of accounting for that debacle. Here we are in the 14th year, we’re approaching the 14th anniversary of the beginning of the Afghanistan war, which is another failure.

Whether we are willing to acknowledge it or not, we’ve been conducting a War for the Greater Middle East that began in 1980 and continues to the present day. Further, I—my new book—will argue that that war isn’t going well. That three and a half decades later, we haven’t won it, we’re not winning it, and the likelihood of simply continuing down the path that we’re on, with the expectation that final victory lies out there just over the horizon, is an absurdity.

My crystal ball is not any better than anybody else’s, but my crystal ball does say that we are moving into a globally multiple order  . . . also in the first tier, China, probably India, Japan, in its weird way, Europe. Weird in the sense that it has tremendous economic and cultural clout, but limited willingness to use hard power. There is a second tier of other nations whose views will have to be taken into account—Turkey, Russia, Korea—and the prospects for avoiding the kind of catastrophes that made the 20th century such a horror lie in the ability of these several nations to produce some semblance of stability. To create an order in which each is sufficiently invested that no one will overturn the apple cart: that’s a huge challenge. . . . the problem there is, from a U.S. point of view, it’s unacceptable even to acknowledge that such a world can possibly exist.

Not an optimistic outlook, but one that is likely accurate.  Americans need to start facing reality and let go of myths - American exceptionalism being one of them - and efforts to avoid thinking.
Posted by Michael-in-Norfolk at Saturday, July 04, 2015