"Hate the Sin, Love the Sinner" - Another Christofascist Lie 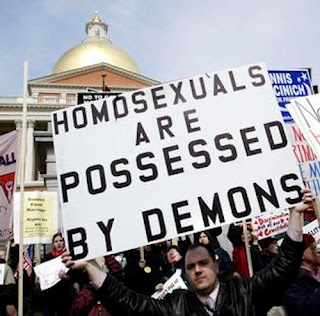 In the wake of Friday's historic marriage ruling, some of the Christofascists are consumed with spittle flecked rants threatening civil disobedience and other forms of resistance to the Supreme Court's ruling.  Others are trying to appear less extreme and are repeating a standard Christofascist lie that they hate the sin - ie., homosexuality - but love the sinner.  Frankly, it's a lie and a crock of horseshit in my view.  You do not "love" someone when you try to deprive someone of civil rights and equality under the law.  Or when you depict gays as not much better than diseased vermin and/or would be child molesters.

Thus, "hate the sin, love the sinner" is merely how Christian bigots try to (i) avoid facing the fact that they are deliberately discriminating against and harming others, and (ii) convince others that they are not foul bigots. It's the height of hypocrisy, something that I believe sadly is the number one hallmark of self-styled conservative Christians. It also ignores several realities, the first being that "deeply held religious belief" has been used for centuries to justify/excuse hate, bigotry, discrimination against others and far worse horrors.  A piece in Religion Dispatches lays blame at the feet of anti-gay Christofascists.  Here are excerpts:

LGBTQ homelessness and suicide are natural consequences of the perpetuation of views denying the full humanity of lesbian, gay, bi, pan, trans, queer, and all non-heteronormative individuals. Any theology rejecting their full affirmation is clearly tantamount to such denial, as we now have a wealth of testimony that the vast majority of LGBTQ individuals do not experience their sexual orientation or gender identity as a choice. If you like, you can believe in a tyrannical god who creates some people only to condemn them for something innate to their created personhood. I will not.

Those who are celebrating the “tipping point,” it seems to me, are failing to hold their co-religionists accountable for the harm they have done to all of us who could not conform to the demands of the fundamentalist evangelical worldview—particularly to members of the LGBTQ community. They are also de facto refusing to acknowledge their own complicity in that harm.

There are calls to drop the hurtful and condescending “love the sinner, hate the sin” rhetoric, which is surely an improvement, but it’s also an attempt to square the circle. As long as the belief persists that same-sex partnerships and transgender identities are inherently sinful, this belief will do psychological harm to LGBTQ people born into evangelical communities.

I appreciate the Christians, including evangelicals, who are trying to do better, those who are living up to Christ’s example of radical inclusivity that I see as the spirit of the Gospel. The problem is that an awful lot of Christians, particularly in evangelical culture, continue to fetishize the letter and lose sight of the spirit. And not only that, but instead of accepting that we live in a pluralist society, too many of these evangelicals, with a huge assist from conservative Catholics, go off in the name of “religious freedom” to fight tooth and nail to keep members of the LGBTQ community from enjoying the same rights and freedoms they do.

The second is that the United States of America was founded as a SECULAR nation with no established religion. One's religious beliefs or lack thereof should have ZERO bearing on one's civil legal rights. For those who have not done so, read the preamble of Thomas Jefferson's draft of the Virginia Statute for Religious Freedom (which predates the U.S. Constitution) and see how Jefferson tears apart those who would link one's civil rights to one's compliance with particular religious beliefs. Stated another way, Jefferson - and other Founding Fathers did so as well - eloquently condemned the very behavior we see virtually daily from the so-called Christian Right (who are neither Christian or right) - i,e, those whom I refer to as the Christofascists:

That all attempts to influence it by temporal punishments or burthens, or by civil incapacitations tend only to beget habits of hypocrisy and meanness, and therefore are a departure from the plan of the holy author of our religion, who being Lord, both of body and mind yet chose not to propagate it by coercions on either, as was in his Almighty power to do,

That the impious presumption of legislators and rulers, civil as well as ecclesiastical, who, being themselves but fallible and uninspired men have assumed dominion over the faith of others, setting up their own opinions and modes of thinking as the only true and infallible, and as such endeavouring to impose them on others, hath established and maintained false religions over the greatest part of the world and through all time;

That our civil rights have no dependence on our religious opinions any more than our opinions in physics or geometry,

Be it enacted by General Assembly that no man shall be compelled to frequent or support any religious worship, place, or ministry whatsoever, nor shall be enforced, restrained, molested, or burthened in his body or goods, nor shall otherwise suffer on account of his religious opinions or belief, but that all men shall be free to profess, and by argument to maintain, their opinions in matters of Religion, and that the same shall in no wise diminish, enlarge or affect their civil capacities.

I remain convinced that if one wants to know why 34% of Millennials have walked away from organized religion, look no farther than those "godly Christians" who are condemning yesterday's marriage ruling. These "Christians" truly make the Pharisees in the Gospels look like nice decent folk in comparison.

The other thing that the Supreme Court noted in yesterday's ruling is that sexual orientation is something that is immutable. It's a part of you that you cannot change. You can try to deny it and try to pretend it's not an unchangeable part of you, but that is only an exercise in self-delusion. In contrast, religion and religious belief are 100% a choice and can be changed simply by walking away from past indoctrination and thinking for one self.
Posted by Michael-in-Norfolk at Sunday, June 28, 2015