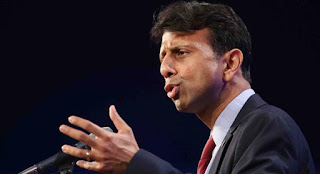 Seemingly desperate to court Christofascist voters n the coming Republican caucuses and primaries, Louisiana Governor Bobby Jindal - whose approval ratings in hid home state are in the toilet - signed an executive order to allegedly fight "discrimination against Christian individuals and businesses" and grant them a license to discriminate against LGBT individuals.  Never mind that the special rights demanded by the "godly folk" were so extreme that they could not win passage in the ultra-reactionary Louisiana legislature.   And never mind that it was Jindal who after the 2012 presidential election debacle said that the GOP needed to stop being "the party of stupid."  Obviously, Jindal is not taking his own advice, and now he is being sued by the ACLU for good measure.  The New Civil Rights Movement looks at Jindal's shameless self prostitution and the ACLU lawsuit.  Here are excerpts:

Back in May, Bobby Jindal's dream of adding to Louisiana law a religious freedom bill that would "protect" Christians from LGBT people and gay marriage failed so miserably it didn't even pass out of committee – despite him personally advocating for and demanding the legislature pass it.

So the Republican Louisiana Governor, having chastised President Barack Obama for lawful use of executive orders to determine which undocumented immigrants would not be deported, based on their family ties in the U.S., signed an executive order designed to, as he wrote an op-ed, fight "discrimination against Christian individuals and businesses." Not, say, "people of faith," or, "those with deeply held religious beliefs," but "Christian individuals and businesses."

On Monday, after the Supreme Court found same-sex couples have a constitutional right to marry, Gov. Jindal had his legal counsel draft a memo explaining to all branches of government that his executive order shields government employees from having to, say, issue a marriage license to a same-sex couple, or officiate a same-sex couple's wedding.

Today, the ACLU Foundation of Louisiana, Forum for Equality Foundation, and six individuals filed suit against Gov. Bobby Jindal's "Marriage and Conscience Order," stating "it goes beyond his constitutional authority as governor."

In a press release, the ACLU notes their lawsuit "asserts that the 'Marriage and Conscience Order' creates a class of persons who are protected over others due to their belief that same-sex couples should be denied marriage equality."


Under the Louisiana Constitution, the governor is not authorized to create a substantive right by executive order. The "Marriage and Conscience Order" creates substantive rights in favor of those who oppose marriage equality, and therefore is invalid.


“Governor Jindal has violated the Louisiana Constitution by setting up special protections for those who share his belief system," ACLU of Louisiana’s Executive Director Marjorie Esman said. "In our country no one is above the law, including the Governor. He swore to uphold the laws of Louisiana. This lawsuit seeks to hold him to that oath."

Jindal is an embarrassment and I suspect many Hindus are shaking their heads in disbelief over his lunacy and shameless self-prostitution to religious extremists, most of who are racists as well.
Posted by Michael-in-Norfolk at Tuesday, June 30, 2015