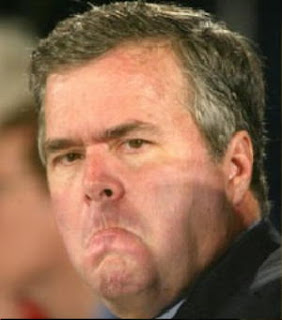 The right's pundits and Fox News continually to talk breathlessly about Clinton scandals, but they are noticeably quiet when it comes to scandals involving Republicans, especially the Bush family which has had more than its share of questionable business deals - indeed, Neil Bush of failed savings and loan fame has become entirely invisible.  But not to worry, Jeb "Jebbie" Bush has plenty of his own just waiting to get the attention that they deserve.  One involves Jebbie's very lucrative job advising Lehman Brothers, one of the firms that triggered the financial collapse causing the Great Recession.  And not only are the right wing pundits silent, but so is Jebbie.  A piece in The Daily Beast looks at what Jebbie is trying to hide.  Here are excerpts:

[Jeb Bush]he continuing to obfuscate some of his most lucrative and potentially controversial business dealings he had before announcing his candidacy, like his work as an “adviser” for investment bank Lehman Brothers?

So, if Jeb won’t tell you what Jeb exactly did while working on Wall Street, in the interests of transparency and disclosure, I will try.

Not much is known about what Bush actually did for Lehman—the firm that went belly-up in 2008 and sparked the wider financial crisis, and Barclays, the bank that purchased Lehman out of bankruptcy and continues to work out of its midtown Manhattan headquarters.
The two banks were his biggest sources of income in recent years: Bush earned more than $14 million working for Lehman and then Barclays, which based on my understanding of simple math accounted for nearly half of the $29 million he made after he left government. Yet in Tuesday’s disclosure, and even in many of his public comments, Bush has downplayed his work for the two banks.

I’ve interviewed numerous Wall Street executives about Jeb Bush, and his role at both firms. What emerges is a portrait of a bank “adviser” who operated more like a high-level investment banker. . . . Bush, according to people with direct knowledge of his activities, helped the firm look for business from well-heeled clients, including everyone from hedge funds to billionaire investors like Carlos Slim Helu, the Mexican business magnate widely regarded as the world’s richest man.

And, in at least one instance, he appears to have been Lehman’s go-to man for an emergency investment during the 2008 financial crisis.

Bush was paid handsomely for this work, but he was also thrust into several awkward situations. A couple of years ago, he met with executives from the Minneapolis-based hedge fund Whitebox Advisors, a major Barclays client. Bush was supposed to be providing high-level insight into economic issues for the big hedge fund, which was one of a handful that correctly predicted the mortgage meltdown that eventually led to Lehman’s collapse. . . . Whitebox’s chief executive, Andrew Redleaf, began to openly browbeat Bush on his brother’s record as president, including his handling of the Iraq War.

One of those clients included Slim, the Mexican billionaire, which looms as one of the most controversial aspects of Bush’s private business dealings. This is because, if accurate, it shows how closely Bush worked with Lehman officials during the firm’s final days.

According to former Lehman executives and various news reports, Bush met with Slim to ask him to make an investment in the firm in the summer of 2008. The investment never happened, and Lehman, famously, filed for bankruptcy in September of that year.

[F]ormer Lehman executives say senior executives at the firm had discussed using Bush as a direct conduit to policymakers—including those reporting to his brother, who was president during the financial crisis—as Lehman was sinking further into insolvency and regulators balked at including the firm in their broader bailout packages.

Given Lehman’s role in the 2008 financial meltdown, it’s easy to see why the former governor would like people to focus on what he billed the other day as the “broken tax system that’s one of the most convoluted and anti-growth in the world” rather than the work he did that earned him millions . . .

[A]as an avowed small-government conservative, you would think Bush would know all about corrosive effects of crony capitalism, where executives at the big banks sit at its epicenter, ready to call in favors from politicians who in turn can help make those executives make a lot of money. For that reason, it’s time for Jeb to fess up about all the work he did for Lehman and Barclays. Only then can he brag that he’s acting “in the spirit of transparency.”