The Myth of American Exceptionalism Collides with Reality 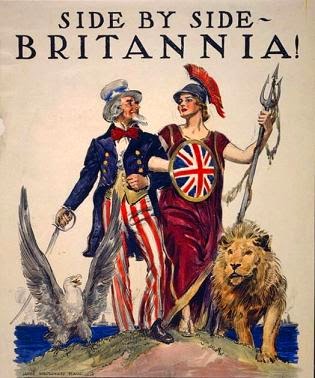 The husband and I are devoted Downton Abbey fans and having been a history major in college (my emphasis was on British and Russian history), I see parallels between the story line in Downton and what's happening to America. Or perhaps, more to the point, I see parallels between (i) Britain's denial of reality on the brink of World War I and during the War's immediate aftermath and (ii)  where America finds itself today in the wake of the Afghanistan/Iraq fiascoes.   One hundred years ago, Britain still ruled one quarter of the world, giving rise to the boast that the sun never set on the British empire, and had the world's most powerful military.   Today, America's influence spans the globe and it has the world's most powerful military.  But as was the case with Britain, especially after World War I, things are changing rapidly in the world, America has bankrupted itself on military spending in foreign disasters, and too many Americans - especially those in the GOP base - cling to the myth of American exceptionalism and refuse to see that the rules have changed.  If America doesn't retool its industries, become a true a leader in new renewable energy sources, and maintain its middle class we will look like Britain in the aftermath of World War II.  It hasn't happened yet, but it will if America doesn't face reality.  A column in the New York Times looks at what is ahead.  Here are highlights:

The American dream, 2014 edition: Squirrel away nuts for a leaner tomorrow. The worst is yet to come, so insure yourself against it if you’re among the lucky few who can.

I was reminded of my conversation with him when I read last week about a fresh projection, from a branch of the World Bank, that the Chinese economy might overtake ours by the end of this year, finishing our century-plus reign as the world’s wealthiest nation. What a run we had! It was great while it lasted.

And it will probably last much longer than another few months. The projection relied on disputed arithmetic. These matters aren’t neat and clean.

But our slide to No. 2 nonetheless seems inevitable, so much so that most Americans think it has already happened. For the last six years, when the Gallup Poll asked them which country was the world’s “leading economic power,” more answered China than said the United States. This year, the spread was an astonishing 52 to 31 percent. Fewer than one in three Americans puts us on top, even though we actually remain there.

In a lengthy memo that he shared with Politico late last year, the Democratic strategist Doug Sosnik assessed what he called “a decade of anger and disaffection,” noting that for 10 years in a row, according to polling by NBC News and The Wall Street Journal, the percentage of Americans who believed that the United States was on the wrong track exceeded the percentage who thought it was on the right track. That’s a change in the very character of the country.

“At the core of Americans’ anger and alienation is the belief that the American dream is no longer attainable,” Sosnik wrote. “For the first time in our country’s history, there is more social mobility in Europe than in the United States.”

American bridges crumble. American trains crawl. American flights leave from terminals that pale next to many Asian and European counterparts.  . . . . We seldom build big things anymore. We just talk about building them and usually decide to take a pass or to wait, whether it’s a high-speed train in California or another tunnel between New Jersey and New York. And while each of these demurrals has a reason, the sum of them has an inescapably defeatist bent. We’re tentative. Timid.

Can a nation so long defined by its faith in an expansive frontier accept limits so easily? If we become convinced that the pie won’t grow, do our politics degenerate into endless squabbling over the slices? And isn’t pessimism a self-fulfilling prophecy?

It is not inevitable that America must follow Britain's path, but to avert that fate, things need to change, particularly the no tax mantra of the GOP which is causing our infrastructure to crumble even as we overspend on the military.  So too we must embrace new industries and new energy sources rather that try to mere squeeze more out of fossil fuel industries that are ultimately bound for obsolescence.

No country can be hegemonic forever, and the U. S. is no exception, but the present Republican mindset will certainly accelerate decay. Growing inequality and blindness to see the real problems will compound to make the U.S. poorer and more unstable. To take refuge in an imaginary past is no solution.