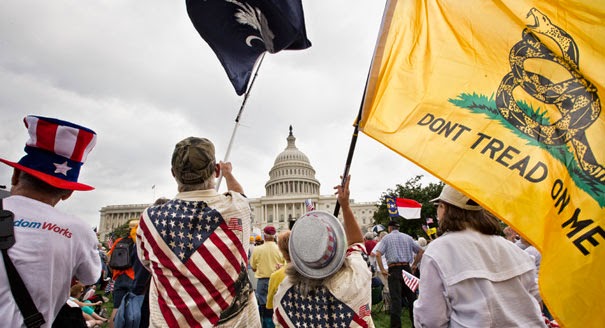 Having seen the early stages in Virginia of the Christofascist take over of the Republican Party base, I have noted many times that the then "GOP establishment" welcomed and voted them onto local city and county committees.  It must be remembered that one has to be elected to these bodies by existing members and that the admission of the crazies could have been blocked.  Sadly, they were allowed in and the metastasizing of the cancer now affliction the GOP began in earnest - as did the party's rejection of logic, reason and knowledge.  Surveys have shown that some 85% of the so-called Tea Party identify as conservative Christians, so it must be remembered that when one hears about the Tea Party, it is basically a re-branded bunch of Christofascists.  Hence the Tea Party's extremism and refusal to accept objective reality and rejection of the rights of other citizens.  With the "godly folk" it is ALWAYS about them and special rights for themselves.  A column in The Daily Beast looks at the Tea Party's refusal to accept defeat after a number of set backs in elections earlier in the week.   What the column fails to do, however, is to adequately link the Tea Party to the extreme Christofascists.  Here are column excerpts:

A day after a series of defeats in primaries in North Carolina and Ohio, Tea Party activists there and across the nation dismissed the results, insisting that rumors of their demise death were greatly exaggerated.

“I feel pretty good. We had a series of goals and we over-achieved,” said Tom Zawistowski, a Tea Party leader in Ohio. There a challenger to House Speaker John Boehner, who is among Tea Partiers almost as reviled a figure as Barack Obama, lost by 60 points, and first-term Rep. David Joyce beat a Tea Party-backed challenger by 10 points.

“We were in it down to the last minute and we spent all of $75,000, and they spent all of  $2 million,” Zawistowski said, referring to Joyce’s race against state lawmaker Matthew Lynch. “We were disappointed we didn’t win but we did prove that we could compete with their money with our people on the street.”

As he and other Tea Party activists in the Buckeye State see it, Tuesday night was just one battle in a long, long war. They point to the more than 65 candidates that ran for office up and down the ballot with Tea Party support, and the five allies that won their primaries for seats in the Ohio legislature.

National Tea Party groups pointed out that they were not much involved in the elections on Tuesday, and that regardless, the results should be viewed in the context of a five-year long running contest that has the GOP establishment still running scared.

There were some silver linings, however. Adam Brandon, an executive vice-president at FreedomWorks, which invested in  both the North Carolina Senate race and the Joyce-Lynch Ohio race, acknowledged that Tuesday was tough, but said the future was looking bright.  He said that while his side invested in Get-Out-The-Vote operations that could be turned on again, the other side had to spend massively on TV ads to beat back their efforts.

“The empire is striking back.  Darth Vader pulled out the force and bombed us with TV ads and direct mail,” he said. “If they want to win they have to bomb us back to the Stone Age. I don’t think that is very sustainable.”

The only way, in my view, to save the GOP is to either let it die or begin a slow campaign to remove the lunatics from power beginning at the local committee level.  Whether the latter approach is something that is possible will remain to be seen.