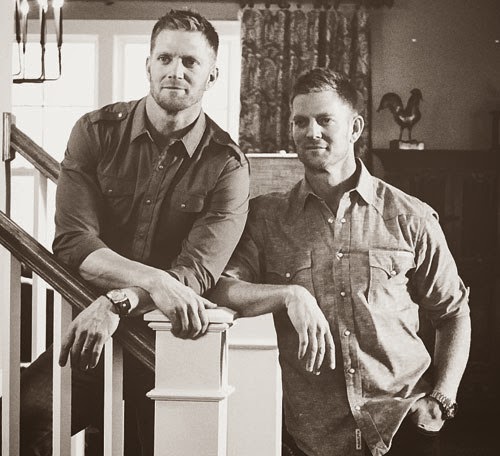 True to form, the Benham brothers and their Christofascists sympathizers are whining and shrieking that the two flaming bigots are being persecuted for their religious beliefs.  Even more stunning is the fact that they are claiming that HGTV cancelled their planned show because of lies and misinformation.  Funny how being shown in a video making heinous remarks about others somehow constitutes "misinformation" of what one said.  These anti-gay, anti-Muslims, anti-women extremists were done in by their own verbatim statements and ugly beliefs.  Right Wing Watch comments on their unbelievable effort to play the victim card:


When HGTV pulled the plug on a reality TV show starring North Carolina real estate dealers and brothers David and Jason Benham following a Right Wing Watch report on David’s anti-gay, anti-choice, anti-Muslim activism, David Benham insisted that the network withdrew support due to misinformation and “lying,” asserting that neither he nor his brother “hate homosexuals.”

Although Religious Right activists have been rushing to defend Benham, none has yet been able to explain how Right Wing Watch’s list of verbatim quotes from Benham constituted misinformation.

Benham’s group refers to abortion rights as a “holocaust” and said that “the devil” was behind Roe v. Wade.

In a January 2012 interview, Benham explained his “love” for homosexuals when he suggested that gay people are under the control of “demonic forces,” arguing that once he succeeds in recriminalizing abortion, he will next defeat the “homosexual agenda” and Islam.

Benham was speaking with none other than Michael Brown, an anti-gay activist who has gone so far as to defend Uganda’s brutal homosexuality law and who leads a group which includes Benham as a board member.

As I have steadfastly maintained, with Christofascists like the Benhams, if their lips are moving, it is a safe bet that they are lying.  In their self-anointed godiness, they are somehow exempt from the Commandment that bars bearing false witness and lying.  Dan Savage also has some pertinent comments:

In a The Stranger blog post, Savage wrote that the “real story” behind the firing is “that we are rapidly approaching the tipping point that I've been talking and writing about for years.”

“Once upon a time white people used to be able to go on TV and say the most racist shit imaginable (argue against legal interracial marriage, argue in favor of segregation) and keep their jobs and be invited back on TV to say that shit a second time,” Savage said. “Then one day you couldn't say that shit (not on TV, at least) and keep your job and be invited back to say that shit again. Opinions that used to be considered 'respectable' were suddenly toxic career enders. We are rapidly reaching the same tipping point on LGBT issues. You can believe whatever you want, but you have to be careful when and how you express your anti-gay animus. Because it could cost you.”

“And David and Jason Benham just learned,” he added.

Christofasists are not kind, nice or decent people.  Their beliefs deserve no deference or respect - thankfully more and more Americans are coming to see them for the monsters that they are.

You may have posted this, but if not, I still remember reading a piece concerning First Amendment rights. YOU have the right to say whatever you wish, and the GOVERNMENT may not stifle that. However, private companies certainly have the right to hire and fire based on how you will bring credit or scorn on their company, and that is NOT smashing your rights at all. Why haven't these clowns learned that speech has consequences? Play all the "victim" cards you wish - you spewed the crap, now it has (as it always does) come back to haunt you. Will these cretins EVER learn?!?!?!