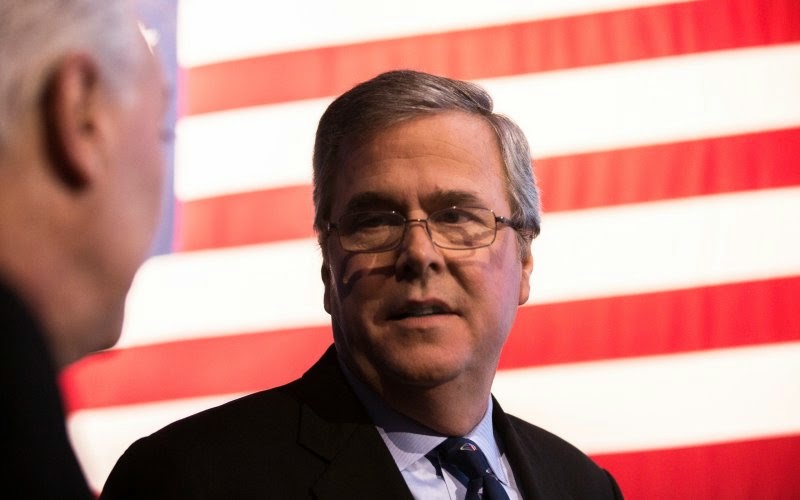 The so-called GOP establishment is desperately looking for an "establishment candidate" for the 2016 presidential contest in the hope of thwarting the insane party base from nominating someone who simply cannot win the general election no matter how loved and adored by the drooling, knuckle dragging masses of the GOP base.  A name that keeps coming up as the GOP's putative savior is Jeb Bush, brother of the cretinous Chimperator Bush who brought us the Iraq War fiasco and who allowed America to suffer the larges terrorist attack in its history on his watch.  While in some ways the nation suffers from "Clinton fatigue," as a piece in The Daily Beast argues, "Bush fatigue" is even stronger and Jeb isn't the savior the Wall Street crowd wants to see him as.  Here are column highlights:

As we know, the search for an “establishment” candidate has been on in the GOP for a while now, a savior who can rescue the party from Rand Paul or Ted Cruz. That man, of course, is Jeb Bush. Last week on Hardball, Kathleen Parker said he is definitely running. She’s a conservative columnist but not a wacko, has establishment GOP credentials and Florida ties to boot. And she spoke with the air of someone who had had this nugget leaked to her specifically so that she would go out on national TV and blurt it out.

So take the idea of a Bush candidacy seriously. He’ll get many of the biggest donors and most plugged-in operatives, and he’ll immediately be spoken of by the media as a, if not the, GOP front-runner.

So far, so normal. But here’s where things get interesting. Historically, “establishment” in this context also basically means “most formidable” and “most electable.” Look at the track record. Mitt Romney was the establishment candidate in 2012, John McCain in 2008, Jeb’s brother in 2000.
It’s an iron law of presidential politics: The establishment candidate is, almost by definition, the most formidable candidate. Well, I guess iron ain’t what it used to be, because here’s the funny thing: Jeb Bush is not any stronger against Hillary Clinton than any of the rest of them. Establishment no longer means most formidable.

Last week’s NBC/Wall Street Journal poll was only the most recent survey to affirm it—Jeb Bush just isn’t very popular, and as for his presidential prospects, a lot of Americans seem to agree with his mother. The numbers are just hideous for him.

In general, he appears to fare no better against Clinton than any of the other Republicans, and in some polls worse. Look at some of the numbers amassed at the Real Clear Politics site. In a recent Colorado poll, Bush did worse against Clinton than Paul, Mike Huckabee, and Chris Christie.

In a national Marist poll from April 15, Clinton led Paul Ryan by eight, Christie by 11, Huckabee by 13, Paul by 14, Cruz by 15, and Bush by 16. That’s right—dead last. Behind Cruz. Yes, we’re talking margin of error stuff here, but still, when they crunched the numbers, Bush was dead last.

Bush doesn’t have problems just against Clinton. The NBC/Journal survey found that among “animated partisans,” 58 percent liked Paul and only 44 percent viewed Bush favorably. A WMUR New Hampshire poll recently found Bush in a distant fourth place behind Paul, Christie, and Ryan. More typically in GOP primary polling, Bush is in the first tier—but he is never clearly in front, the way an establishment candidate is supposed to be.

So what’s the problem? For one thing, Bush has real liabilities. He hasn’t been in office for eight years. He’s simply a little out of practice. His interventions over the past year—his book, for example—just haven’t done for his profile what he hoped.

So that’s the part of the problem that has to do with Bush himself. But the other part of his problem has to do with the party. As I’ve written before, the GOP has almost always nominated the establishment guy. But this might be a different GOP—a party in which the establishment paladins just might not be in control of things the way they once were.

So if Kathleen Parker is right and Bush does jump in, as you read all those stories crowning him the new favorite because he’s the establishment, just remember that while he may be the establishment choice, in this GOP, that doesn’t count for much.