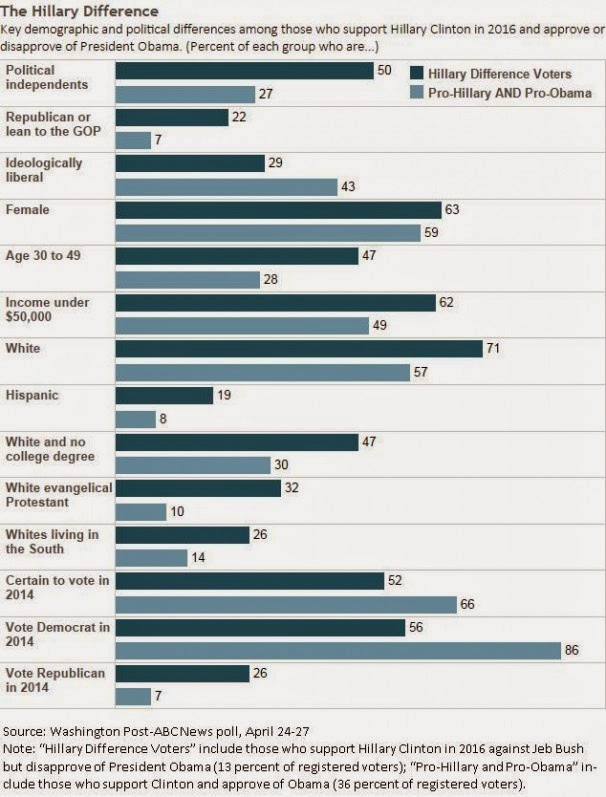 The Republican's arrogantly believe that all they need to do in the 2014 mid-term elections is (i) run against Barack Obama to bring out the racists in the GOP base and (ii) run against what they derisively call Obamacare to bring out independents.  Hopefully, this calculus turns out to be in error.  Moreover, as a column in the Washington Post notes, it may ignore the so-called Hillary factor that might motivate more of the Democratic base to turn out.  Stated another way, there are those who do not like Obama but who do like Hillary and might, therefore, be inclined to make the effort to get out and vote come November.  Here are column excerpts:

There are two majorities in the country right now. One disapproves of President Obama. The other is still inclined to vote Democratic. The key question for the 2014 elections is whether voting this fall — and Obama’s approval ratings — can come into line with the electorate’s broader Democratic leanings.

There is also this: Obama’s difficulties do not appear to be hurting Hillary Clinton’s chances of winning the presidency in 2016.

These are the findings just below the surface of the latest Washington Post/ABC News poll released last week. Obama’s approval rating in the survey was just 41 percent, both with the general public and among registered voters. But in a hypothetical matchup with Jeb Bush for the 2016 presidential race, Clinton was favored by 53 percent of registered voters, Bush by 41 percent.

The roughly one-eighth of voters who disapprove of Obama but nonetheless support Clinton for 2016 may be the most important group in the electorate. If Democratic candidates can collectively manage to corral Clinton’s share of the national electorate this fall, the party would likely keep control of the Senate and might take over the House of Representatives.
These Hillary Difference Voters, as we’ll call them, could find themselves the most courted contingent in this year’s contests.

Who are they? A comparison of those who back Clinton but disapprove of Obama with the group that is both pro-Clinton and pro-Obama suggests that the swing constituency is much more likely to be blue-collar and white — 71 percent of the mixed group are white, compared with only 57 percent of the pro-Obama, pro-Clinton group, and it is also somewhat more Latino.

Ideologically, the swing group includes significantly fewer self-described liberals. Among the Hillary Difference Voters, only 29 percent call themselves liberal; among those who both favor Clinton and approve of Obama, 43 percent are liberals. Nearly a third of the mixed group are white evangelical Protestants compared with only 10 percent of those who react positively to both Democrats.

Interestingly, while the swing group is 63 percent female.

While Hillary Clinton, like her husband, can reach moderate voters — thus her popularity among non-liberals — the contours of the Hillary Difference constituency are decidedly populist. The voters Obama and the Democrats need to re-engage are a less affluent, non-elite group for whom the economy is the central concern. In their different ways, both Clinton and Warren may end up pointing the party and the president in the same direction.

The swing voters this year are motivated by economic discontent. They don’t trust the Republicans but aren’t happy with the Democrats. Hillary Clinton has many of them. Obama needs them to come back his way.