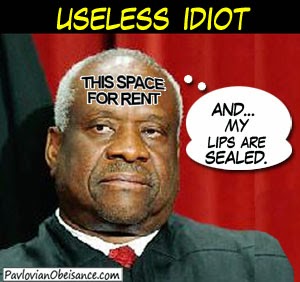 I have frequently made the case as to why Supreme Court Justice Clarence Thomas is unfit for the Supreme Court bench - or in reality, any other judicial position given his utter inability to separate his own religious beliefs and religious based prejudices from his rulings.  As shockingly horrible as the conservative majority opinion was in the case of Town of Greece v. Galloway, which focused on whether or not it is constitutionally acceptable to begin the meetings of legislative bodies with prayer, Thomas went on to suggest that under the U.S. Constitution, the federal government probably could not establish an official religion, the states could perhaps do so.  For non-Christians, the message is clear: go f*ck yourselves.   A piece in the Washington Post looks at Thomas' dangerous and frightening views.  Here are excerpts:

The majority opinion pointed out that the town made a good-faith effort to bring in prayer leaders from a variety of religious backgrounds and that there is a long tradition of legislative prayer — even sectarian legislative prayer — not being deemed coercive or unconstitutional.

But Clarence Thomas, in his concurring opinion, went even further on the subject of the establishment of religion. That whole clause is just a federalism thing, he argued. States might well be able to establish religion, if they really wanted to.

“The Establishment Clause provides that ‘Congress shall make no law respecting an establishment of religion.’ ” Justice Thomas quoted in his concurring-but-wishing-they’d-gone-further opinion. “As I have explained before, the text and history of the Clause ‘resis[t] incorporation’ against the States. … If the Establishment Clause is not incorporated, then it has no application here, where only municipal action is at issue. As an initial matter, the Clause probably prohibits Congress from establishing a national religion.”

Sure, James Madison’s original draft of the First Amendment was a good deal stronger: “The civil rights of none shall be abridged on account of religious belief or worship … nor shall the full and equal rights of conscience be in any manner, or on any pretext, infringed.”

Thomas went on to note that, when the Founders were Founding, plenty of states had established religions. It was the done thing.

But that wasn’t for want of opposition — some of that from the Founders themselves. In fact, James Madison and Thomas Jefferson were both heavily involved in the battle for religious freedom in Virginia. Discounting Jefferson as someone who liked to go through his Bible excising passages he considered impractical, it still seems fair to consider what Madison had to say on the issue. And he felt quite strongly.

He offered up some fiery words on the subject during a debate over a “a Bill establishing a provision for teachers of the Episcopal religion” in Virginia, noting: “If ‘all men are by nature equally free and independent,’ all men are to be considered as entering into Society on equal conditions; as relinquishing no more, and therefore retaining no less, one than another, of their natural rights. Above all are they to be considered as retaining an equal title to the free exercise of Religion according to the dictates of Conscience. Whilst we assert for ourselves a freedom to embrace, to profess and to observe the Religion which we believe to be of divine origin, we cannot deny an equal freedom to those whose minds have not yet yielded to the evidence which has convinced us. If this freedom be abused, it is an offence against God, not against man…”

Freedom of religion, as the Founders experienced it, was definitely “of” and not “from.” To live out one’s religious beliefs undisturbed was the reason many had come to America in the first place. Madison wished for the vigorous establishment of freedom of religion because he thought this would benefit both Church and State. He wrote to Edward Livingston on July 10, 1822, that “Religion Flourishes in greater purity, without than with the aid of Government.”

There's more, but the take away is that "originalists" like Thomas and Scalia seek to willingly do violence against the freedom of religion that the Founding Fathers wanted for ALL citizens, not just Bible thumping Christians.