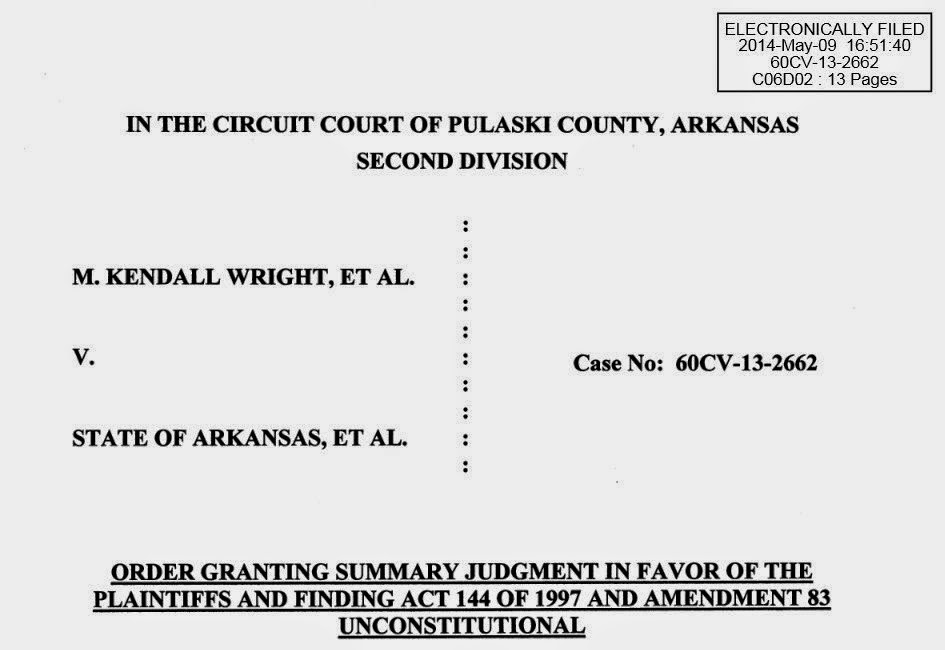 There must be shock and convulsions among the bigots and haters "godly folk" in the wake of a ruling by Arkansas Circuit Court judge Chris Piazza that held that Arkansas' ban on same sex marriage and non-recognition of same sex marriage legally performed in other states were unconstitutional.  While no immediate stay of the ruling was issued, it is expected that the state, in slavish pandering to Christofascists will appeal the ruling.  The ruling builds on an unbroken string of court rulings that have recognized anti-gay marriage bans for what they are: Religious based animus targeting a segment of the population that are unconstitutional.  Like Judge Arenda Wright  Allen her ruling in Bostic v. Rainey, Judge Piazza noted the parallels with Loving v. Virginia.  Here are more details from the Arkansas Times:

An appeal is expected. The judge did not stay his ruling, though the state probably can be expected to request a stay. Reaction was quick, with Republican politicians first out of the box to decry the ruling.

he order came after county clerks offices closed for the week. But they can expect a flood of applicants Monday morning. Pulaski County Clerk Larry Crane said he'd be ready with software to issue gender-neutral marriage licenses Monday morning. The judge's decision not to issue a stay isn't surprising. Why would a judge allow something he found unconstitutional to continue? He might also decline McDaniel's request, which would send the attorney general to the Supreme Court for relief. It recently issued a stay of a lower court order in hotly contested lawsuits over judicial candidacies after Circuit Judge Tim Fox didn't issue one. The lawsuit didn't name all county clerks, however, so there will be haziness about enforcement of the ruling statewide without a stay.

The lawsuit challenged both the 2004 state constitutional amendment and a 1997 law. Piazza's 13-page ruling struck down both.

Here's the full ruling.
Piazza said "tradition alone cannot form a rational basis for a law." He wrote in lofty terms about freedom for all and cited landmark federal cases. He commented about criticism that is sure to follow:

The court is not unmindful of the criticism that judges should not be super legislators. However, the issue at hand is the fundamental right to marry being denied to an unpopular minority. Our judiciary has failed such groups in the past.

Not Piazza. He concluded by citing the past landmark Arkansas Supreme Court decision striking down criminal laws aimed at homosexuals as an invasion of privacy and then his own earlier ruling that foiled an effort to prevent gay couples from parenting.


The Arkansas Supreme Court applied a heightened scrutiny and struck down as unconstitutional an initiated act that prohibited unmarried opposite-sex and same-sex couples from adopting children. The exclusion of same-sex couples from marriage for no rational basis violates the fundamental right to privacy and equal protection as described in Jegley and Cole, supra. The difference between opposite-sex and same-sex families is within the privacy of their homes.

THEREFORE, THIS COURT HEREBY FINDS the Arkansas constitutional and legislative ban on same-sex marriage through Act 144 of 1997 and Amendment 83 is unconstitutional.

It has been over forty years since Mildred Loving was given the right to marry the person of her choice. The hatred and fears have long since vanished and she and her husband lived full lives together; so it will be for the same-sex couples.

It is time to let that beacon of freedom shine brighter on all our brothers and sisters. We will be stronger for it.

Anyone who truly values equality and freedom should be thrilled by Piazza's ruling.