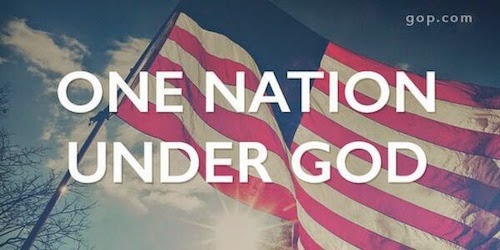 The insanity and batshit craziness of the Republican Party is now complete - as is the apparent Christofascist take over of a political party that once values, knowledge, logic and reason.  That's all out the window now as the GOP officially proclaims that it is the party of God and rips asunder the last pretenses that the party respects the concept of separation of church and state.  And that's not even considering the wrong headed ruling of the five conservatives on the U.S. Supreme Court who more or less flipped their middle finger at non-Christians  who will now be forced to sit through proselytizing " Christofascist invocations" at the beginning of city and county council meetings and other governmental meetings.   The New Civil Rights Movement looks at the GOP's admission that it no longer supports the U,.S. Constitution.  Here are excerpts:

Over the weekend, the Republican Party (RNC) announced it is officially the party of God. In an embarrassing tweet that links to an even more embarrassing petition, the RNC announced “Religious freedom is our God-given right.”

“TELL OBAMA TO DEFEND RELIGIOUS FREEDOM,” it commands. “Make sure America is defending this God-given right.”

The “religious freedom” President Obama is supposedly not defending is not his to defend. The petition chastises the President for “not taking freedom of religion seriously” because “for the second time in his term,” President Obama has left vacant a ceremonial post, the Ambassador-at-Large for International Religious Freedom.

[T]he Republican party is now attacking President Obama for not quickly filling a largely ceremonial post that has nothing to do with anything a President should be policing — religious freedom abroad — while not accepting the fact that their policies have made going to college so expensive and unwieldy that a U.S. Ambassador had to resign to put her sons through college.

But by comparison, let’s talk about all the judicial nominations and other federal positions nominated by the President that the Republican Party has blocked. Surely we can all agree that filling the federal bench at home, filling important positions in the Judicial and Executive Branch is far more important than filling one religious position (in an office that truly has no business even existing within the federal government) abroad?

The Republican Party has made it clear it has zero intention of actually governing, zero intention of performing the duties it is paid to by the American people, and zero desire to do anything but lie and harm President Obama’s agenda.

This, my fellow Americans, is the official party of God.

The GOP has become precisely what the Founding Fathers feared:  religious belief and practice being imposed as a criteria for one's ability to hold public office and the effort to impose support of one religious dogma on all citizens.  Increasingly, one can argue that the GOP favors treason and the overthrow of the U.S. Constitution.
Posted by Michael-in-Norfolk at Monday, May 05, 2014