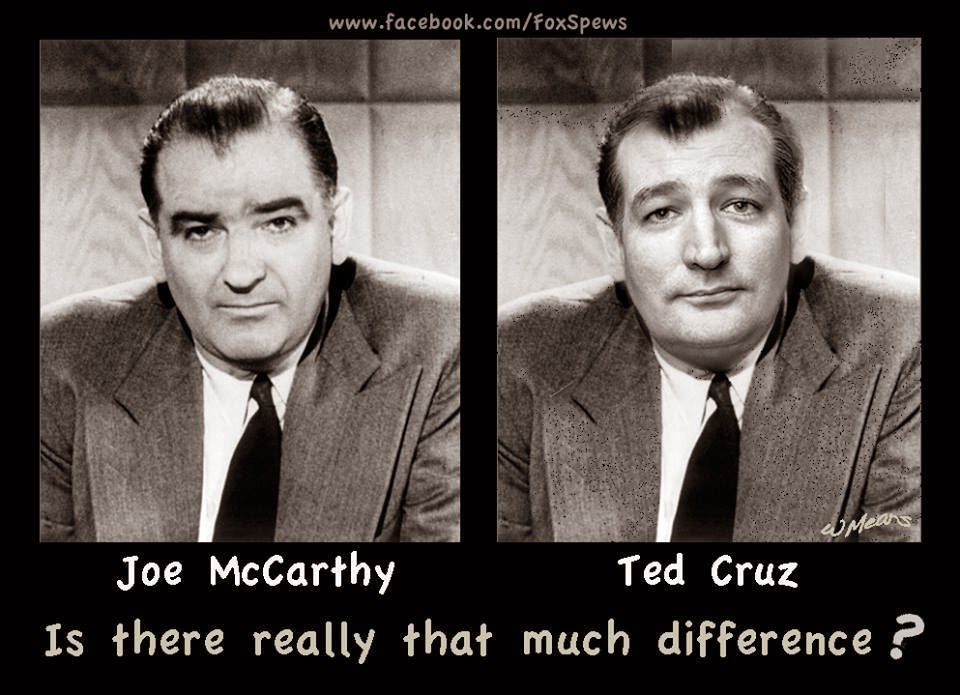 Among the most disgusting and demagogic of the Congressional Republicans - and there are a lot of them - is Ted Cruz who seems to want to be the 21st Century reincarnation of Joe McCarthy who backed the Red Scare witch hunts in the 1950's.  Cruz is just as reckless and power mad and even bears somewhat of a physical resemblance to the foul Mr. McCarthy (see image above).  A piece in the Washington Post looks at Cruz's irresponsible demagoguery aimed to inflame the hate and extremism of the members of the GOP base who bear an unrelenting hatred towards Barack Obama, much of it racially inspired.  Lies and false accusations sadly have become the norm for today's Republican Party.  Here are column excerpts:

Sen. Ted Cruz, in a speech to fellow conservatives at the Federalist Society this week, provided detailed evidence of what the right calls the “lawlessness” of the Obama administration.

The Texas Republican, in his latest McCar­thyesque flourish, said he had a list of “76 instances of lawlessness and other abuses of power.”

Cruz was particularly agitated about President Obama’s use of signing statements, executive orders, recess appointments and unconfirmed “czars” — omitting the salient detail that this president has used four less than George W. Bush, for whom Cruz worked as a campaign adviser and administration official.

Beyond such perennial check-and-balance disputes, Cruz’s list was a recitation of policy grievances (Cruz, if you haven’t heard, doesn’t like Obamacare very much, nor the president’s immigration policy). These were interspersed with some whoppers that the senator, a former Texas solicitor general, couldn’t have researched thoroughly.

Consider item No. 2 in the “Other Abuses of Power” section: “Backed release of the Lockerbie bomber, Abdel Baset al-Megrahi.” This does sound bad — and strange, given that Obama had publicly said he was “angry” about the release, which was “a bad decision.”  The footnote on Cruz’s allegation points to an article in the Australian newspaper, a curious source. I looked up the article, which stated that “the U.S. wanted Megrahi to remain imprisoned in view of the nature of the crime.”

Cruz, in a preamble to his accusations, writes piously of “the president’s persistent pattern of lawlessness, his willingness to disregard the written law and instead enforce his own policies via executive fiat.”

Cruz must have found some of his allegations too good to check — such as the charge that Obama “spent $205,075 in ‘stimulus’ funds to relocate a shrub that sells for $16.” Actually, the removal of the plant (which had been believed to be extinct in the wild) was part of a massive road project run by California, not the federal government. Like thousands of other projects, it got stimulus dollars — less than 10 percent of its total funding.

No item was too small to escape Cruz’s notice. Obama “shut down an Amish farm for selling fresh unpasteurized milk across state lines,” he alleges. Actually, the Food and Drug Administration was acting under the authority of a federal court order — not exactly lawlessness.

Cruz disagrees with Obama on just about everything. But this doesn’t make Obama a criminal.

Cruz needs to be a one term Senator.  He needs to be shipped back to Texas where he can live in his own little fantasy world.
Posted by Michael-in-Norfolk at Saturday, May 10, 2014