The Idiocy of the Republican Base 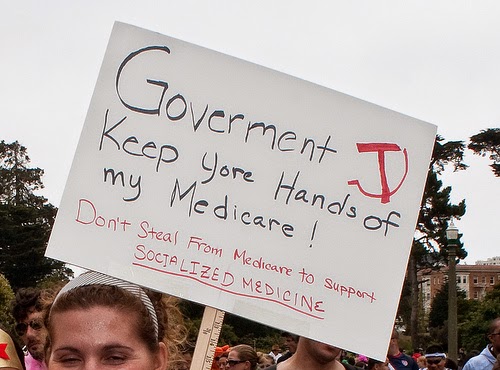 There are times I think that those who comprise much of the GOP base need to have "I'm a cretin" tattooed across their foreheads.  How else to explain the stupid ignorant individual in the image above.  Not only doesn't she get the simple fact that Medicare IS socialized medicine just as much as Obamacare is, but she's so dumb that she doesn't grasp that it is the REPUBLICANS who are targeting Medicare for serious change.  I often wonder how people can be so uninformed and ignorant.  I can only assume that she's a regular Fox News viewer or that she's had a lobotomy.

A post on Blue Virginia summed up the situation well.  Here's a highlight:

"Diane Fisher, who lives on disability payments in Winchester, says she tends to vote Republican because there are 'too many freeloaders these days. We're in the lower part of the economy here and people don't have a lot of money. Everything's going too fast, too much. We're getting left behind.'"

The classic "What's the Matter with Kansas" conundrum: why do people vote against their own self interest? In this case, you have someone who depends on government benefits (disability payments) for her survival, yet rants about "too many freeloaders" and votes for the party of the Ryan budget, which would slash programs for poor people like Fisher in order to reward their wealthy and powerful contributors (corporate and individual). Brilliant! Who ARE those "freeloader," by the way? For decades, since the "Southern Strategy" honed the messaging to a shrill dog whistle, the Republican Party has relied on convincing working-class white people that those "other" people - blacks, Latinos, etc. - are taking YOUR money and mooching off the system, while you suffer the consequences. It's all complete bull****, of course, but amazingly there are millions of Diane Fishers out there who actually BUY this crap! Sadly, even in American in the year 2014, fear, bigotry and ignorance remain powerful forces. And, come to think of it, there's nothing "funny" about that, except perhaps in a very dark humor sort of way.

The GOP has truly become the party of ignorance.