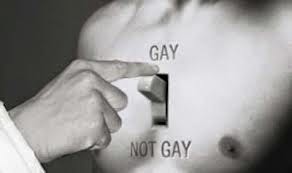 As this blog has noted countless times at this point, EVERY legitimate medical and mental health association in America condemns so-called reparative therapy and concludes that gay conversion efforts do not work.  Even former ex-gay poster boy John Paulk and the former president of Exodus International have admitted the claims of "change" are little more than lies and self-delusion.  But that doesn't stop parasite "ex-gay" ministries from preying on the gullible and pandering to parents who are more concerned about what people will think about them than they are for the welfare of their child.  These parents, in my view, are the height of selfishness.  They ought to be charged with child abuse.  Right Wing Watch looks at the batshitery that is the norm for PFOX - Parents and Friends of Ex-Gays - which is a far right Christofascists organization staffed by self-loathing "ex-gays for pay" like Greg Quinlan.  Here are story excerpts - Note the traits that supposedly make one susceptible to homosexuality and the number of discredited quacks cited as "experts":


A recently released spring newsletter [PDF] of Parents and Friends of Ex-Gays and Gays (PFOX) includes an essay by Steve and Janice Graham, who describe their efforts to rid their son of his “destructive” homosexuality.

“To us, homosexuality is a deviation, a disorder, a willful rebellion, or a combination of these,” they write, adding that their son’s ex-gay therapist told him to “tell us every homosexual feeling or thought he experienced each day.”

When our son admitted his problems with homosexuality, we took him to see a psychiatrist—but it was too upsetting for him. He thought we believed he was crazy. We didn’t know what to think. We were in shock—and a bit of denial.

In his book, A Freedom Too Far, Dr. Charles Socarides describes how we felt during this time:

“Announcements like this that our kids have suddenly decided [or in our son’s case, become convinced] they’re gay amount to a kind of murder of the family. Parents can’t imagine things that are worse. It’s something like a premature Alzheimer’s disease; there’s no more real communication, no more sharing of experience, now, or ever. Some great parents can say that this is okay. But, deep down, they know they are deluding themselves. This can mean the end of hopes and dreams for their kids—that they will some day experience the extreme joys that have been repeated over and over again since civilization began, that they will become parents. And make them grandparents. To know that this isn’t going to happen—well, it’s a sadness.”
…
Years later, our son’s therapist concluded he wouldn’t have struggled with homosexual tendencies had it not been for the pervasive homosexual influence of the internet. In other words, he was fed a gay identity. It began with the power of suggestion—by our son looking at body builders online. Having endured a lot of teasing from his peers, he was curious about his male body. He wondered if he had what it took to be a “real man.”

Many parents today back off when their child tells them they’re “gay.” This never occurred to us. To us, homosexuality is a deviation, a disorder, a willful rebellion, or a combination of these. It isn’t anyone’s true self. As Michael Glatze notes, “The whole gay identity is completely a fabrication. You’re not a homosexual; you’re a heterosexual with a homosexual problem. It’s literally all in your mind.”

In “Seven Ways to Recruit-Proof Your Child,” Scott Lively writes “it’s never too late for a child to recover his innate heterosexual orientation.” He cautions: “it will take much more work than taking preventive action would have.”

I can only imagine the psychological damage done to the child of these insane and self-centered parents.  From 37 years of trying to "change," I know that this bullshit doesn't work and all it does in cause internalized self-hate and self-loathing.  I pity the child of these horrible people.