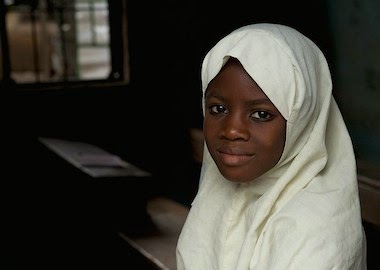 We hear incessantly from the Christofascists that "one man and one woman" marriage is "biblical marriage" as designed by God.   Like just about everything that comes from the lips of the Christofascists, it is a lie.  A close review of the Old Testament portion of the Bible in particular, shows that polygamy was the true norm in terms of biblical marriage.  Moreover, most brides were little more than girls who all too often had no voice in the selection of their husband to be.  Indeed, given their involuntary entry into such marriages, they might well be called "rape-marriages."  All these facts, of course are conveniently ignored by the godly folk.  A piece in Religion Dispatches looks at the fate of girls in Nigeria which reflect true "biblical marriage.  Here are excerpts:

Nearly 300 Nigerian schoolgirls have been ripped from their desks and chairs, notebooks and pencils, smiles and giggles and sent to hell. They’ve been sold, trafficked for sex and reproduction and household labor. Typically described as “forced” marriage, it would be more accurate to call it rape marriage. And, along with polygamy, rape-marriage is a form of biblical marriage despite being regularly overlooked by conservatives proclaiming their desire to return to biblical marriage. It’s evil but it also happens to be scriptural.

The practice of rape marriage occurs in many cultures and while it is sanctioned by scriptures it actually reflects the antiquated beliefs and practices of many cultures. Boko Haram, the Nigerian terrorist group (mis)uses the language of Islam in declaring forbidden—haram—all forms of western education. Its sole purpose, they claim, is to (re)turn to a state where their cultural and religious values, as they imagine them, are normative, according to their interpretation of Sharia.

In their gross misrepresentation of Islam Boko Haram has turned to a pre-Muslim, pre-Christian practice, that of human trafficking for rape-marriages. These terrorists target girls who are being freed from the shackles of illiteracy and sell them into sexual slavery, quasi-sanctioned by forms of marriage that don’t require the consent of the girl.

The concept of rape marriage is not unique to these villains or their perversion of Islam. The Jewish and Christian scriptures have their own rape texts. . . . . The desire for biblical marriage is more than a reification of heteronormative marriage; it’s also a rejection of women’s sexual and reproductive autonomy. At its core, rape marriage reduces girls to objects for sale and barter to reproduce through torturous conditions, women who are compliant and accepting of their lot in life as household, sexual and reproductive slaves.

Forced illiteracy is key. Boko Haram is as threatened by the doodle-covered grammar books and primers of schoolgirls as American slaveowners were by letters scratched in the dirt by the women and men they claimed to own

In my commentary on Ruth, I argue that “Religious authorities (bible translators, pastors, seminary professors) have been criminally negligent in exposing the ways in which the biblical narrative sanctions and contributes to the abuse of women in general, and wives in particular.” So we must tell the whole story about the treatment of women and biblical marriage, one which hardly resembles the rosy picture religious conservatives seek to invoke with that phrase.

We must tell the truth that the bible says that fathers can sell their daughters into sexual slavery (Ex 21:7)—given that enslaved women were used to breed slaves and for sexual gratification; there was no slavery for women in the bible that was not sexual slavery. (An argument can be made for the sexual abuse of male slaves as well.)

We must tell the truth that the bible says soldiers can take virgin girls home with them as the spoils of war (Num 31:17).

We must tell the truth that the bible says cut the nails off the woman you take home as your war prize (Deut 21:11)—making the rape easier on the rapist.

We must tell the truth that the bible says that Israelite identity does not protect women from wholesale rape as a tool of war; Judges 21:10-23 details repeated kidnappings of girls for rape marriage within Israel by other Israelites.

We must tell the truth that the bible says Ruth and Orpah were abducted into rape marriages just like the Nigerian schoolgirls.

We must tell the truth that what is biblical is not always godly, holy or even right.  We must teach the bible’s Iron Age theology because it permeates our culture and society and we must reject that theology when it is death-dealing.

The objectification of women and girls as objects for rape and forced procreation is the manifestation of the rejection of their—our—humanity. It is older than the bible and the other scriptural texts it permeates.
We must reject rape culture in all its forms, looking in all our houses, including houses of worship, sacred spaces and sacred texts.

Telling the truth and the Christofascists are mutually exclusive.  While Christ's Gospel message is positive, much of the Bible is a horror story that justifies all kinds of evils.  It is about time that people realize that the "Good Book" really is not so good in many, many ways.
Posted by Michael-in-Norfolk at Sunday, May 04, 2014