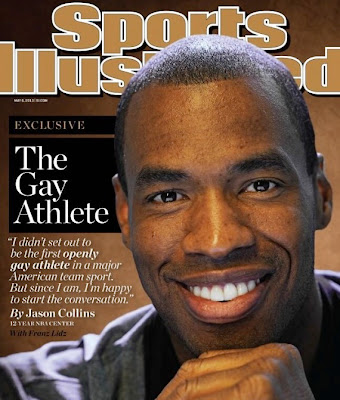 Personally, I believe that it is far past time that gay pro athletes come out of the closet.  That said, I do understand the fear and homophobia (and general bigotry) that they face.  Hence my kudos to the NBA's  Jason Collins on his decision to come out and start living an authentic life.  As one who lived in the closet for over three decades, I know first hand just how exhausting it is to live in the closet expending enormous amounts of energy playing the straight role that one thinks is expected of them by friends and family.   Living "out" and authentically, all that misdirected energy can be directed at positive accomplishments rather that continuing a charade.  Sports Illustrated looks at Collins' story from the perspective of his twin brother.  Here are excerpts:


What does Jason want out of this? He wants to live his life. He wants a relationship, he wants a family, he wants to settle down. He wants to move forward with his personal life while maintaining his life as a professional basketball player. That's all, really.

This announcement will be surprising to some people. I already anticipate the questions: "Are you the gay twin or the straight one?" This is uncharted territory, and no one can predict how it will play out. It's a big deal -- but it's also not a big deal. When the media crush is over, Jason will have the strength to deal with whatever challenges come from being openly gay.

As for us, we're still going to give each other grief. (He's still going to be a terrible golfer; he's still the guy who could help more with changing my kids' diapers.) We'll still be competitive in our way. As kids we were always pushing each other, whether it was for good grades or for possession of the remote control. As NBA players we both wanted to be stronger, so each summer we would have a "liftoff" to see who could put up more weight.

Today, Jason has taken a huge weight off his shoulders. And I've never been more proud of him.


When I was finally out both at work and socially and with my family, I still recall the huge sense of relief I felt and the feeling that a tremendous weight had been lifted off of me.  Andrew Sullivan had apt refletions in one of his posts:


The first NBA player to come out is both African-American and a beautiful writer:


The recent Boston Marathon bombing reinforced the notion that I shouldn’t wait for the circumstances of my coming out to be perfect. Things can change in an instant, so why not live truthfully? When I told Joe a few weeks ago that I was gay, he was grateful that I trusted him. He asked me to join him in 2013. We’ll be marching on June 8.


No one wants to live in fear. I’ve always been scared of saying the wrong thing. I don’t sleep well. I never have. But each time I tell another person, I feel stronger and sleep a little more soundly.


It takes an enormous amount of energy to guard such a big secret. I’ve endured years of misery and gone to enormous lengths to live a lie. I was certain that my world would fall apart if anyone knew. And yet when I acknowledged my sexuality I felt whole for the first time. I still had the same sense of humor, I still had the same mannerisms and my friends still had my back.

I want to salute Collins for making more space in the world for more people barred by social norms from being fully who they are. He has single-handedly increased the level of oxygen gay athletes can breathe.

We’re all mortal. We all only have now. Why not tell the truth? It’s as liberating as Jesus predicted. And as transformative as the last two decades have been – as the truth has slowly won out over ignorance and prejudice. But it only did so because it was accompanied by its most powerful partner: courage.


Andrew is right.  It is SO liberating.  Indeed, at this point, I would rather die than go back in the closet.  I truly do not think that I could do it and survive.  For those still in the closet, consider coming out as Jason Collins has done and start living your life as you are.  There may be rough spots along the journey, but over all, I suspect you will find it to be the best thing that you have ever done.

Email ThisBlogThis!Share to TwitterShare to FacebookShare to Pinterest
Labels: Andrew Sullivan, coming out, Coming Out at Work, gay athletes, Jason Collins, living out and proud, making a difference, NBA