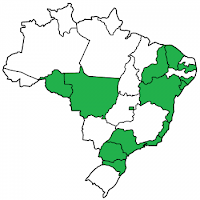 While the USA sits waiting for the U.S. Supreme Court to issue rulings in Hollingsworth v. Perry (the case challenging Proposition 8) and United States v. Windsor (the case challenging the Defense of Marriage Act), Brazil has again demonstrated what equality under the civil laws means as two more states grant full marriage equality to same sex couples.  With this action 14 out of Bazil's 27 states and federal district (i.e., 52%) allow full marriage equality  while in America - the alleged "land of liberty" and religious freedom, only 10% of the states grant such civil law equality.   Also, unlike in the USA under DOMA, gay marriages performed in any state allowing gay marriage are recognized in every state in Brazil.   All in all, it is a sad commentary on the USA and underscores the lie that religious freedom extends to all American citizens.  Freedom to Marry looks at these latest events in Brazil.  Here are highlights:

Now, nearly 60% of the population of Brazil live in states where same-sex couples can marry without the two-step process.

After marriage legislation takes effect in Uruguay, France and New Zealand, same-sex couples will be able to share in the freedom to marry in 17 countries.

Of course, it is not just in terms of gay marriage that America is lagging behind.  Much of Europe provides more upward social mobility, and the USA's position  is falling in terms of life expectancy, and our health care system is the most expensive and least cost effective in the world over all.  And what's holding America back?  The Republican Party and its Christofascist base.