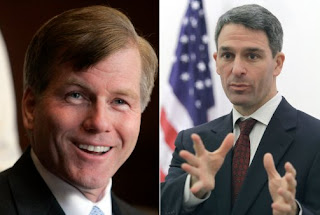 I'd be lying if I said I wasn't enjoying watching Bob McDonnell and to a lesser extent, Ken Cuccinelli continue to sink in the quicksand of the Star Scientific scandal.  Both men, apparently through greed and hubris, were only too happy to accept gifts and campaign donations from the company nad its CEO, Jonnie R. Williams Sr.  But now, their behavior has boomeranged and is biting them in the ass and raising questions in some circles as to whether the former chef at the governor's mansion is being prosecuted by Cuccinelli for spilling the beans to the FBI rather than because of any actual thefts from the governor's mansion.  The whole saga increasingly looks like something out of a night time soap opera rather than what ought to be occurring in the highest circles of Virginia's government.  Wonderfully, the story just keeps growing just as Cuccinelli seeks to seriously launch his campaign for governor.  The Washington Post looks at the shady situation in an editorial.  Here are excerpts:

WHAT SPELL WAS CAST by businessman Jonnie R. Williams Sr. to induce forgetfulness and truth-shading from Virginia Gov. Robert F. McDonnell and the man who would succeed him, Attorney General Ken Cuccinelli II? What powers of alchemy does Mr. Williams, a major campaign donor, possess that prompted those two officials, the state’s most powerful elected Republicans, to flagrantly disregard Virginia’s already flimsy disclosure laws?

Already, we have seen Mr. McDonnell strain veracity by dodging disclosure of a $15,000 donation from Mr. Williams, in payment of a catering bill, on the grounds that it was a gift to the governor’s daughter for her wedding. Facts that have emerged since that claim suggest that the money was a straight-out contribution to the governor, who signed the catering contract.

Then it turned out that Mr. Cuccinelli, the presumptive Republican candidate for governor, somehow suffered a multi-pronged amnesia attack that led him not to report more than $5,000 in contributions from Mr. Williams, owner of a firm that makes dietary supplements. Among other things, the money paid for Mr. Cuccinelli’s summer vacation last year; a catered Thanksgiving dinner in 2010 for the attorney general and his family; and a flight to New York.

Now The Post’s Rosalind S. Helderman and Jerry Markon report that the FBI is looking into the relationship between Mr. McDonnell, his wife, Maureen, and Mr. Williams .  .  .  .  As for Mr. Cuccinelli, he finds himself in a rapidly thickening ethical morass related to the whistle-blower who first alerted federal and state authorities to the McDonnell-Williams back-scratching. In what appears to be a flagrant conflict of interest, Mr. Cuccinelli — who has counted on Mr. Williams for gifts and travel and Mr. McDonnell for political support — gave the green light to embezzlement charges against the whistle-blower, Todd Schneider, former top chef at the Executive Mansion.

Here we have the attorney general of Virginia, who aspires to be governor, prosecuting the chief tormentor of two of his most important patrons. That’s not just a failure of common sense on Mr. Cuccinelli’s part; it’s an ethical lapse.

The troubling questions about the McDonnell-Cuccinelli-Williams affair are mounting. Did the governor and his wife accept unreported gifts from Mr. Williams in return for political favors? Did Mr. Schneider’s role as whistle-blower factor in any way into Mr. Cuccinelli’s pursuit of criminal charges against him? How could Mr. Cuccinelli not have remembered that Mr. Williams paid for his family’s summer vacation last year? Virginians deserve answers.

From my experience over the years, it is always those who loudly profess their religiosity and support of "family values" who turn out to be the biggest crooks.  The way things are going, it looks like McDonnell and Cuccinelli fit that mold.  And what makes this entire mess so delicious is that it is all self-inflicted.   Cuccinelli needs to be defeated this November.  He's not only an extremist, but also sleazy beyond belief.