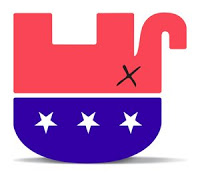 Today's Republican Party, in addition to being the political home of religious extremists, homophobes and white supremacists, has become the party of "No."  Its sole goal seems to be to block any and every proposal coming from the Obama White House or from Democrats.   Yet, other than slashing social programs for the poor and middle class while seeking tax cuts for the wealthy, the GOP seems to have no game plan or proposed solution to pressing issues that need legislative action.  As a former Republican, it dismays me to see what the party has become.  Conservative columnist Michael Gerson has a Washington Post op-ed that makes reasoned arguments for why GOP obstruction needs to end.  Would that members of the GOP would listen.  Here are key excerpts:


First, they must manage to get back to George W. Bush’s level of support among Latinos — somewhere in the low- to mid-40s — and eventually compete for a majority of that vote. The alternative is political irrelevance at the national level. Sen. Marco Rubio’s immigration-reform effort is not sufficient to get Republicans to their goal. But if Republicans sabotage this effort, they will be discredited. The embrace of reform would earn Republicans a hearing. Given the current 13-year path to citizenship in the bill, the GOP would then have three presidential cycles to reposition itself as the party of immigrant aspiration.

Second, Republicans must manage the difficult task of becoming more socially inclusive without becoming socially liberal. Much of the party’s base is in a pew on a Sunday morning, and this isn’t going to change. But there is no reward in being the aggressors in the culture war. Any coalition that includes the young will need to accommodate diverse opinions on gay rights. And a truly pro-life party will also be committed to the rights and dignity of the poor and vulnerable. Moral conservatives gain credibility through consistency.

Third, Republicans must manage to stand for long-term fiscal sanity while promoting social and economic mobility. There is no economic value or political appeal in austerity for its own sake. One reason the health entitlement crisis is so dangerous is that it progressively squeezes domestic discretionary spending. Republicans need to accompany proposals for structural entitlement reform with creative measures to encourage education, job training and entrepreneurship.

All of these Republican goals demand a response more sophisticated than simple obstruction. For the GOP, politics is not a zero-sum game — and I don’t mean this in a good way. It is entirely possible for Obama to lose on a variety of issues and for Republicans to lose as well, in ways that make future victories less likely. Supporting a perfectly constitutional expansion of gun background checks might have been an opportunity for Republicans to display some rationality in public, even if it marginally aided a lame-duck president. Undermining immigration reform would be a terrible miscalculation, even if Obama is hurt.