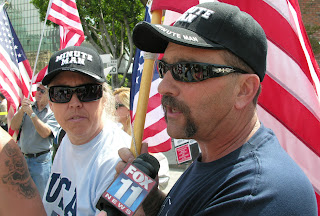 I have never understood the fear of those who are different that seems to permeate the GOP base.  Indeed, as a child and teenager, I longed to travel to different lands and experience different cultures.  And I have never had a problem seeing the common humanity of others even though they may speak a different language, have a different skin color or not share my exact religious beliefs.  Perhaps it is because my mother who spoke Spanish before English and lived well over the the first decade of her life overseas.  Whatever the factors in my personal openness to others, I find some irony in the fact that the GOP has pandered to the racists and white supremacists in the party base and now this short term strategy may yet bite the GOP in the ass and send it into eventual political oblivion.  A piece in BuzzFeed looks at the GOP predicament.  Here are excerpts:


For the Republicans in Washington who hoped a new bipartisan push for immigration reform would give their party a fresh start, a new face, and a second chance with Latino voters, 2013 is instead reviving some of their worst memories.

The legislation currently winding through the Senate with the help of party superstar Sen. Marco Rubio is still very much in play, and could well become the first law in a generation to address the country's immigration morass. But as conservative criticism of the reform effort grows louder, many Republican operatives, donors, and consultants are bracing for an outcome that would be even worse, politically, than the demise of the bill: a fierce, national, right-wing backlash that drowns out the GOP's friendlier voices, dominates Telemundo and Univision, and dashes any hopes the party had of making inroads to the Hispanic electorate by 2016.

"We are really balanced here on a little precipice, and if this, pardon the pun, goes south, we could be in very serious trouble," said Republican media strategist Paul Wilson, citing the increasingly intense attacks on the immigration bill coming from the right. "If [the legislation] stalls or is killed off by conservatives, we could take the Hispanic community and turn them into the African-American community, where we get 4% on a good day... We could be a lost party for generations."

Establishment Republicans don't have to reach too far back in recent history to find precedent for this political nightmare scenario: It would look a lot like the last time Congress pursued comprehensive immigration legislation.

In 2007, the conservative war on immigration reform  .  .  .  . "Tancredo was out there screaming every day, and if you were watching Univision, it would say the Republicans appear to be killing the bill," he said. "That remains the danger this time."  Meanwhile, in city council meetings, town halls, and border towns across the country, the grassroots fight over immigration was reaching a fever pitch.

A group of self-appointed border guardians who called themselves the Minutemen had evolved from a strange object of curiosity in the mainstream media to a symbol of the right's perceived anti-immigrant fervor. B-roll of shotgun-wielding militia men camped out in the southern desert was played on a constant loop on Spanish-language networks.

The conservative backlash provoked a new militancy among immigrants as well: Advocates for the undocumented began holding massive counterprotests in Los Angeles, Dallas, and other cities with large Latino populations.

But the conservative campaign to kill the immigration bill in Washington ultimately succeeded — at a high electoral cost. Whereas exit polls in 2004 showed Bush receiving upwards of 40% of the Latino vote, that figure plummeted to about 31% for John McCain in 2008, and 27% for Mitt Romney last year.

"Go to sites like RedState or Breitbart and search headlines about immigration and Rubio, and then look at the comments. Some of them are really, really nasty," said one prominent Republican strategist who spoke on condition of anonymity. "That's the thing that I worry about a little bit. That kind of tells me that the harsh xenophobic thing from 2007 could be coming back."

The strategist added that a large-scale conservative campaign against immigration reform would be particularly disastrous if the bill actually passes, creating millions of new Latino voters over the next decade who would be tasked with choosing between the party whose president signed the reform measure and the party whose members fought to keep them out.

And there are signs that the immigration hard-liners are waking up.   Rubio has been fending off increasingly sharp attacks by the conservative media, and many Republicans in Congress are becoming more vocal in their skepticism of the bill.

"We've held our powder dry and have decided to come forward now because ... we are concerned about having this wash over us and not having the opportunity to have constitutional conservatives in this country and in this congress have their voice heard," Rep. Steve King told reporters earlier this month. "We don't have a moral obligation to legalize people who are here illegally."

Democrats don't need to work to destroy the GOP.  The GOP base is busy doing that even as I type this post.  Getting in bed with horrible, nasty people ultimately has its downside - as the GOP establishment may well be about to learn again.
Posted by Michael-in-Norfolk at Tuesday, April 30, 2013