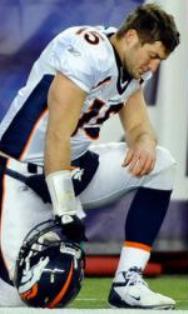 Personally, I have always found Tim Tebow to be obnoxious at best.  His constant displays of feinted religiosity never belonged on the football field.   Especially, if one gives credence to the Gospel passages that direct that one pray in private and not make a public show as did some of the Pharisees so roundly criticized by Christ.  Yesterday, Tebow got his comeuppance when he was dumped by the New York Jets after the team could not find any team that would take Tebow as a trade.  ESPN looks at Tebow's downfall.  Here are excerpts:

One year after bringing Tim Tebow to Broadway, creating a nationwide fascination that slowly evolved into controversy, the New York Jets on Monday made the long-anticipated move of releasing one of the NFL's most popular players.   The Jets confirmed the release in a three-paragraph news release, a long way from his Super Bowl-sized news conference last March.

Ryan and general manager John Idzik informed Tebow early Monday morning in a face-to-face meeting at the team's facility before he was expected to work out with teammates, a source said. Tebow left the building shortly thereafter.

After using a second-round pick on Geno Smith this past weekend, the Jets had six quarterbacks on the roster, and someone had to go. The Jets tried for months to trade Tebow, sources said.

When no other team offered even a seventh-round draft pick for Tebow by the conclusion of the NFL draft on Saturday, the decision was imminent, sources said.

The Jets had given permission this offseason to Tebow's agent, Jimmy Sexton, to try to seek a trade, a source familiar with situation said. More than one team reached out to see whether Tebow was willing to switch positions from quarterback to tight end, but he was not.

The Tebow trade never came close to living up to the hype, as Tebow played only 77 offensive snaps. It became apparent late in the season that he'd be one-and-done in New York.

Many figured he'd wind up playing for his hometown team, the Jacksonville Jaguars, but the new GM, Dave Caldwell, shut down that idea at his first news conference in January.

Tebow could help his chances by agreeing to switch positions, several league executives said, but he wants to remain a quarterback.

Jim Popp, the general manager of the Montreal Alouettes in the CFL, said he'd be interested in Tebow if he failed to land a job in the NFL. But he wouldn't be handed a starting job. Tebow's CFL rights are owned by the Alouettes.